AJ Fonte do Bastardo claimed Portugal’s national cup for the first time in their history after routing VITORIA SC in the final match played this past Sunday at Dr. Mario Mexia sports hall in Coimbra. Read more volleyball news on worldofvolley.com. 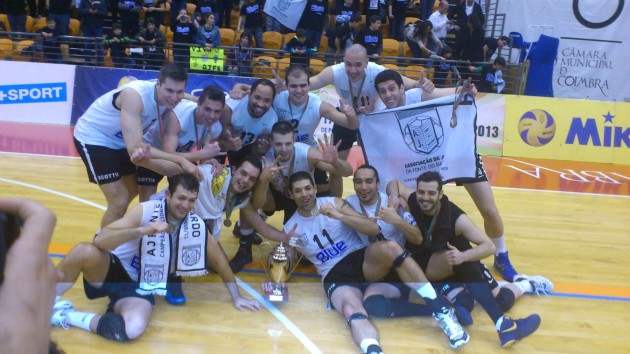 VITORIA SC caught a good start (2:0) but the team from the Azores responded well and set the pace of the game (8:5) by the first technical time-out of the opening set. Though VITORIA SC played with good intensity, still it was AJ Fonte do Bastardo to cash the provisional 1:0 (25-20). They eventually controlled the match also in the second set going up 19:10 and bringing it home at 25-15 anchored by Pablo Cirqueira, Gilson De França and Manuel Silva. AJ Fonte do Bastardo started out very strong also in the third set (4:1, 6:2) and paced by their middle blocker Jardel Mariano the guys from the Azores cruised to the final 25-21 that sealed a memorable 3:0 win.

Their head coach Alexandre Afonso said: “I am very proud to be the mentor of this team by the time it claims the national cup for the first time. It is a privilege to work for this club where we all enjoy excellent conditions. It deserves this win and hopefully many more will follow in the future. We’ll be now focusing on the national league though we know that we have a tough task ahead but we’re ready to fight for the best result there too”.

Setter Bruno Gonçalves added: “It is a relief and much joy at the same time to finally lift the trophy after losing the final for three times. I would like to thank all players for the commitment they have showed and their desire to win”.

“Fonte Bastardo played really good, they did not risk that much and waited for our errors” the mentor of VITORIA SC, Allan Cocato, said. “Though we lost I am nevertheless proud that we did make it to the final and would also like to thank our fans for their great support. They did show once more that Volleyball is something very special for our community in Guimarães. We have a young team and as the season got started we could even not dream about making it to the final of the national cup, so we can be happy with that”.