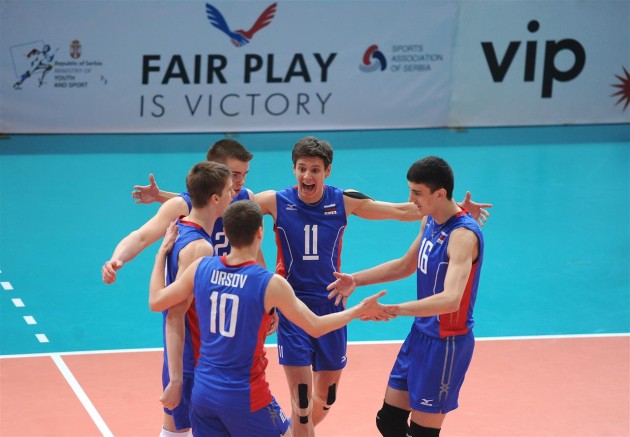 Through the mid section of the first set France was an equal rival to the powerful Russian team.  However, right before the second technical time-out the strongest Russian weapon, the block, started to function perfectly and Pool II leaders created a nice gap for themselves at 16-13. After the break France did their best to stay close, but the Russians were too solid, and they did not allow any surprises. In the end, Victor Poletaev’s spiking kill after a powerful Nikolai Chepura’s serve made it 25-17 for Russia and 1:0 in sets.

In the beginning of the second set Russia stormed to a 6-2 lead, and France’s head coach Slimane Belmadi had to ask for a time-out. However, it only got worse for the French side who could not find the key to Russia’s game. The gap was getting bigger by the minute, and once again Russia easily wrapped it up at 25-14 making it 2:0 in sets.

The third set developed pretty much in the same way as the first one, only the roles were changed, and this time France went to the second technical break leading 16-14. The French augmented the lead even further (21-17), but Russia came close by winning two points in a row (21-19). France asked for a time-out, and after the break Stephen Boyer stepped up with an ace for the set point at 24-21. Russia’s Victor Poletaev managed to narrow the gap serving a couple of fantastic shots, but in the end he missed the most important one and France got away with a slim, but well deserved 25-23.

In the fourth set the Russian block was once again the key factor of the game. France struggled to come up with an answer and ended up falling behind too much as Russia was heading smoothly to yet another victory. In the end, it was an easy 25-15 and 3:1 to the unbeaten Russians who now officially qualified to the semi finals as the victors of Pool II.

Alexander Karikov, head coach of Russia: ”Today we played well, despite losing a set. France responded nicely in the third set changing their tactics, but we managed to adjust and everything finished well for us.”

Slimane Belmadi, head coach of France: “We know the Russian team very well. They are so strong and it is very hard to play against them. However, today we made a lot of mistakes. The most important thing for us is to win tomorrow.”

Maxim Troynin, blocker in the Russian team: “This is a great result, but we are not satisfied with this. We want more, and we have to prepare well for the final stage in Laktaši.“

Luka Bašić, captain of France: “We are not satisfied, even though we won a set against such a strong team. Tomorrow is the most important match for us and we will try to do our best.“