Belgium debuted in the qualifier for the 2013 FIVB Volleyball Women’s U20 World Championship by routing Denmark in three sets too to re-assert their intention to fight for that much desired ticket to the Worlds. Read more volleyball news on worldofvolley.com. 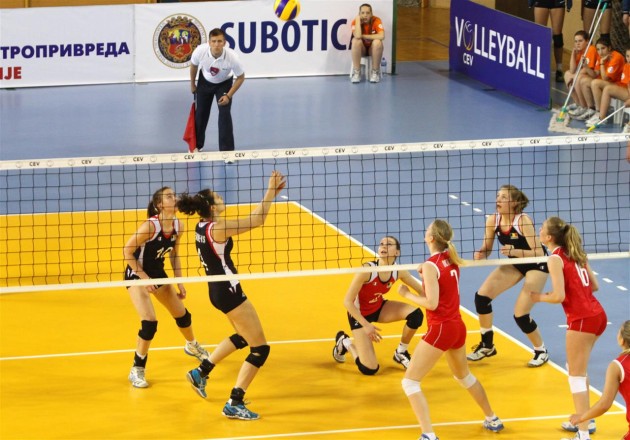 As they celebrated their debut in the tournament, the Belgian players – dressed in black – routed Denmark in three straight sets (25-12, 25-13, and 25-10). Celine Van Gestel top scored for the winning side with 12 points, with Belgium registering 14 aces in the game vs. only 3 for Denmark. Belgium did not wait that long to impose their rhythm and by dominating in every fundamental they quickly pocketed the opening set (25-12). The score remained close in the early phases of the second set (9:8) but Belgium accelerated the pace with good attacks and serving to move up 22:12. Though Denmark’s head coach Skafte Herskind called his players by his side it did not help with Nathalie Lemmens and Sofie Hawinkel finishing the set at 25-13. Playing with real ease the players from Belgium dominated the scene also in the third set (16:4) cruising to a speedy 25-10 to claim three valuable points from their first game in the tournament.

“We were quite surprised by the quality that Denmark had displayed yesterday while playing France” Belgium’s head coach Julien Van de Vyver said. “However, we had prepared very well for this debut and we controlled the game. We served well, defended many balls and I am very happy with this win in straight sets”.

“I am very happy because we had been watching the game Denmark had played yesterday with France. Yesterday they played better than they did today but we also were well prepared for this match. I am very satisfied with the result” Belgium’s team captain Lize Van Cleemputte added.

“As you can see from the result they were the better side and we could not do much but we will take our lessons from this game” Denmark’s team captain Emma Brix stated.

“Belgium is a very good team as shown by the results they have claimed in the last editions of the European and World Championship. So the result is quite normal. We knew they can play good but we could not prepare good enough as they had a free day yesterday and could not see them in action. I think we have a lot to learn as they are better than us physically and technically. However, it will be good to see how my players are going to respond to difficult situations. I think we could have played better but let’s wait and see if we can improve in our next games” Denmark’s mentor Skafte Herskind concluded.

ITA W: Finals go to round 4