The home guys of France scored on Thursday their third consecutive win in Saint-Jean d’Illac – venue of one out of four qualifiers for the 2013 FIVB Volleyball Men’s U21 World Championship – this time by edging Latvia in straight sets. With this result France keeps an immaculate record in the event following on their previous victories over Poland and Portugal. In the other match of the day Poland edged Portugal 3:0 to keep alive their hopes to make it to the World Championship scheduled for late August in Ankara and Izmir, Turkey. 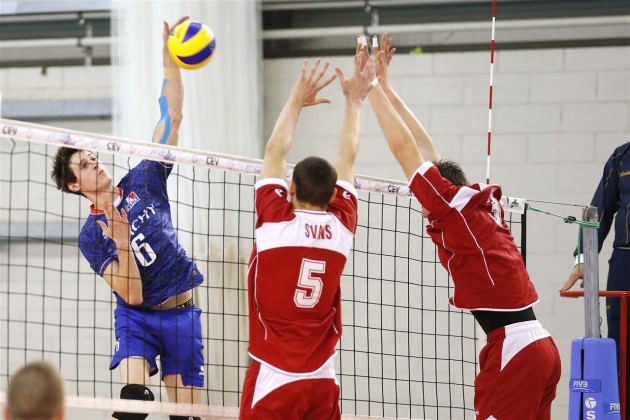 France needed only 65 minutes to cruise past their opponents from Latvia as they registered 10 aces while Julien Winkelmuller top scored in the end with 17 points. France’s team captain and wing-spiker Trévor Clevenot added 16 to the count for his side. Latvia never looked capable of posing a real threat and stopping the march of the home guys. However, France’s head coach Stéphane Faure was not happy at all with the mistakes he did see in the third and final set. “This is the kind of game that can be quite frustrating for a coach. My players knew well before the end that they would have won and hence struggled to keep their focus and concentration. I would have preferred a more solid performance before on Saturday we play Belgium for the game that most likely will determine who makes it to the Worlds” he said.

On Friday France will have a rest day before playing the Belgians, bronze medalists from the 2012 European Championship. “We know each other very well. Belgium has a solid and very balanced team. They may be less brilliant, but surely more consistent than us” Faure added.

But before crossing their ways with France, Belgium will be playing Poland on Friday and will need to display their best Volleyball especially after Poland looked somehow back on track by sweeping Portugal in three sets. The game was completed in slightly more than an hour. “With this result we still keep some chances to qualify for the World Championship” Jakub Wachnik, best scorer of the day with 16 points, said.

Exercises for core strength and power