Bulgaria claimed their second win at “Hristo Botev” sports hall in Sofia as they easily edged their neighbours of Romania in straight sets (25-23, 25-19, and 25-16) to continue their quest to the 2013 FIVB Volleyball Men’s U21 World Championship in Turkey. Read latest volleyball news on Worldofvolley.com. 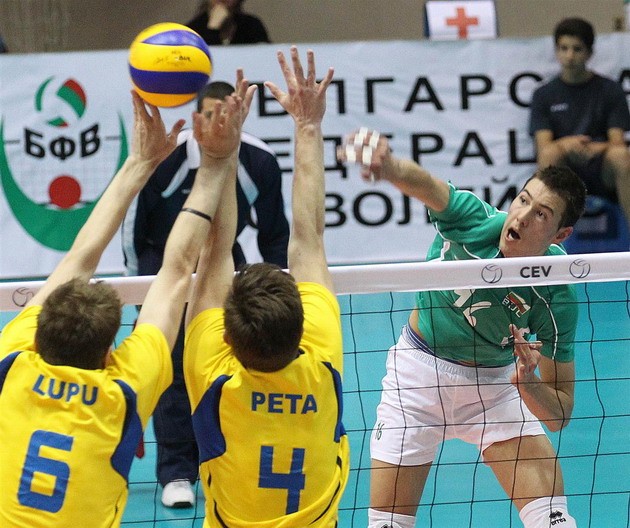 Bulgaria caught a weak start and trailed 4:8 in the opening set of their match with Romania as the home side was struggling in defense while the guests attacked with good consistency. Romania was able to keep a margin of four points up to the second technical time-out but Bulgaria ultimately found their way into the game, drawing level at 21 all and showing great determination to bring it home at 25-23 for the provisional 1:0.

Once more Bulgaria showed some problems in reception in the early phases of the second set so that Romania could set the pace of the game (8:7); however, as the game resumed after the technical time-out, Bulgaria scored three consecutive points and after that the home guys started showing their skills and real potential. Romania’s game, on the other hand, was sidelined by many mistakes and Bulgaria could cruise to the provisional 2:0 (25-19) by combining a solid defense with strong attacks.

Bulgaria caught a promising start in set 3 but some errors helped Romania keep the score relatively close. The local heroes got a margin of two by the first mandatory break and after some more mistakes, Bulgaria found back their best play to claim a 4-point lead (16:12). As Bulgaria did not stop scoring, Romania’s defense looked shaky and hence the home side could pocket their second win of the tournament in three straight sets (25-16).

Rozalin Penchev and Dimitar Marinkov top scored in the end for Bulgaria with 16 points each while Ionut Miron paced Romania.