USA: USAV Board Focuses on Long Term at January Meeting 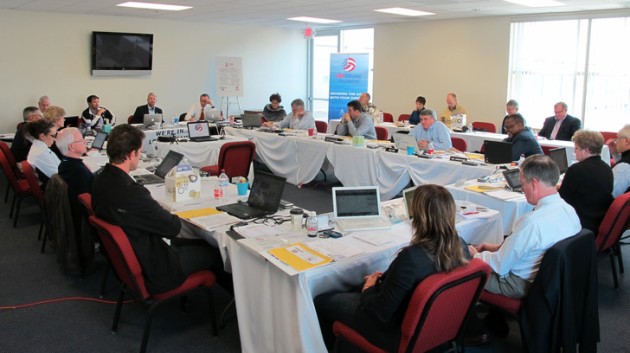 Among the meeting highlights included the approval of the 2012 operating budget and the 2013-2016 quadrennial financial goals, and presentations by the City of Anaheim and the Southern California Volleyball Association.

“Many thanks to the members of the Board for a successful board meeting in Anaheim, particularly our newest independent board member, Ken Shropshire,” USA Volleyball Board of Directors Chairman Adam Rymer said.

“Special thanks go to Anaheim Mayor Pro-Tem Lorri Galloway and Southern California Volleyball Association Commissioner Ann Davenport for their presentations. Having the meeting at the American Sports Centers, the home of the U.S. Men’s and Women’s National Teams, gave the board a great insight to the hard work that goes into making these programs a reality. We are greatly looking forward to this 2012 Olympic year and to the participation of all volleyball supporters in making it a true success.”

USA Volleyball CEO Doug Beal presented to the Board the organization’s Olympic Activation plan, which will guide USAV’s promotions leading up to, during and after the 2012 Olympic Games. He updated the Board on the Olympic and Paralympic Games qualification status of each team. USA Volleyball has received significant buy-in from its athletes in coordinating their own individual Olympic media promotions with USA Volleyball through a widening social media plan that includes a revamped Facebook page set for launch on April 18, or 100 days out from the 2012 Olympic Games.

Consistent with its forward-thinking, strategic planning, the Board reviewed terms of the USA Volleyball office building purchase that will help facilitate expanded services to its membership.

“While the move to a new office space was a foregone conclusion as staff had more than fully outgrown its prior space, this move is about more than square feet and a reasonable investment decision,” Rymer said. “This building represents the past, present and future of USA Volleyball.”

Beal provided the board an update on USA Volleyball projected membership growth in 2011-2012, which is tracking ahead of schedule based on last year comparisons boding well for an overall increase in membership. He also informed the Board of exciting hosting opportunities, both at the NORCECA and FIVB level, in the upcoming year. USA Volleyball will serve as host for the FIVB World Congress held in September in Anaheim.

“Overall, the meeting was very positive,” Beal said. “This was our first opportunity to meet at the American Sports Centers in Anaheim since its expansion to nearly double in size, which allows it to offer expanded services in the largest volleyball facility in the country. At the same time, our board was able to connect to the City of Anaheim where our teams train in a positive way.”