Finland beat Portugal 3-0 on Friday (25-13, 29-27, 25-18) as the 2013 FIVB World League finally got underway. In front of a home crowd at the Helsinki Ice Hall, the powerful serving and spiking of the Finns was too much for the visitors. Valdir Sequeira, Mikko Oivanen, Antti Siltala and Urpo Sivula were the top scorers. 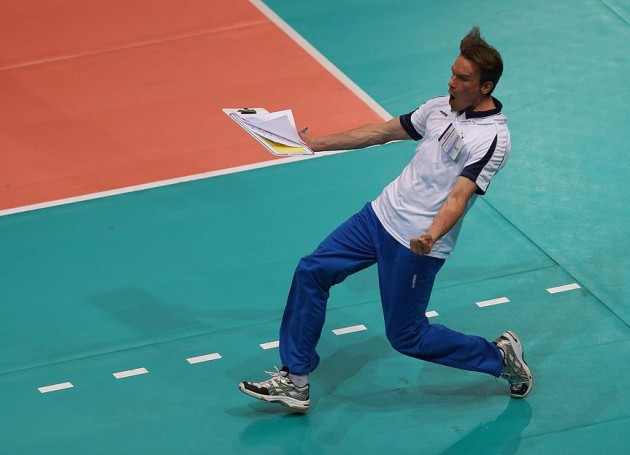 Finland coach Tuomas Sammelvuo shows his passion during the match

The win took Finland to the top of Pool C as the other competitors, Canada, Japan, Korea and the Netherlands, had yet to play.

The serving efficiency of the Finns proved to be the key difference between the two sides. Finland got five direct points from Matti and Mikko Oivanen, but the serves also built up several good spiked finishes. Finland also got 29 points from Portuguese errors.

Finland took command of the match immediately in the first set, building a a solid 13-6 lead. Portugal took a time out, but it didn’t help, as Finland won six of the next seven points to lead 19-7. Portugal had problems passing Finland’s blocking, and the Finns even gained points from triple blocks. Finland coasted to a first set victory of 25-13.

In the second set, Portugal started to read the Finnish defence and found striking spaces. They also held on better during interchanges. The home side led 4-1, but Portugal struck back and got ahead for the first time at 6-5. The Finns then edged to 13-10, but Portugal won six of the next seven points to get back in front, 16-14. Valdir Sequeira struck 10 excellent spikes and the visitors fought hard.

A smart hit by Idner Lima Martins, and a fast combination finished by Ivo Casas fended off a couple of Finnish set points, but Matti Oivanen’s hard serve eventually gave Finland the set victory at 29-27.

In the third set Portugal also kept up well, leading 12-10. But Finland‘s power took them to a six-point lead, which they protected without difficulty. They took a 25-18 set victory, sealing the match.

The game marked a World League debut as coach for Tuomas Sammelvuo, 37, who retired as a player last summer. Sammelvuo played 294 national games for his country.

Portugal’s Valdir Sequeira topped the scoring with 15 points. The top scorer for Finland was Mikko Oivanen, with 12 points, followed by the game’s next highest scorers, Antti Siltala and Urpo Sivula at 10.

The match at the Helsinki Ice Hall was watched by a crowd of 2,580.