The Czech Republic made a giant step towards qualification for the Final Round of the European Championship by achieving an away straight-set win over Romania 0:3 (17-25, 19-25, 25-27). Aneta Havlickova was the top scorer with 15 points. 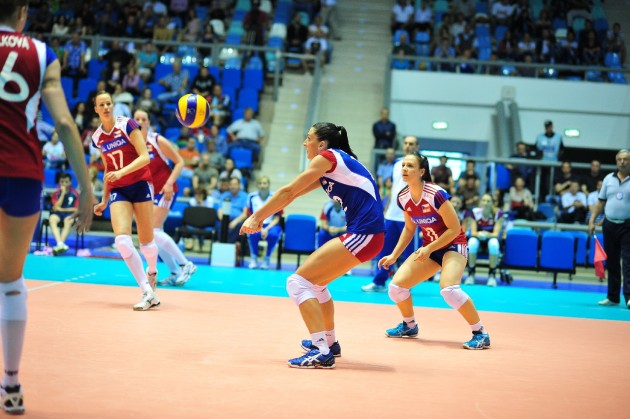 Aneta Havlickova contributed 15 points to the winning tally of her team at Sala Polivalenta Oltenia in Craiova, while Denisa Adriana Rogojinaru was Romania’s most productive player with 11 points.

The first set started with the Czech Republic dominating on the court through excellent spikes by opposite Aneta Havlickova and middle blocker Michaela Monzoni that could not be stopped by the home team and by the first technical time-out the guests took the lead by 2 points.

Romania tried to come back in the match with good blocks by the middle blocker Nneka Onyejekwe, but the Czechs increased the distance to 6 points at the second technical time-out with incredible attacks by the wing spiker Helena Havelkova and with good reception by her teammates. Romania tried to stop the Czech offensive but nothing seemed to work out and the opponents closed the set at 25:17.

The story of the second set was similar. Romania seemed overwhelmed by the powerful spikes of Havlickova that left no chance to her opponents to manage a recovery. The Czech girls took control of the set and doubled the gap from 8-5 to 16-10 between the two technical time-outs. Romania tried to balance the score through inspired blocks and spikes of middle blocker Alexandra Sobo, but everything was in vain. The amazing attacks by the middle blocker Ivana Plchotova made the day for the Czech girls who finished the set at 25-19.

The third set started with Czechs continuing in great shape and eager to close the match as quickly as possible. Again Havlickova found the soft spots of Romania’s defense that was not playing at its best allowing that Czech team to lead at the first technical time-out by 8-6. But Romania retaliated through better reception and some excellent hits by wing spiker Denisa Rogojinaru that managed to turn the advantage around for 16-15 at the second technical time-out.

The home team seemed to be riding the high tide with excellent attacks by wing spiker Adina Salaoru that succeeded to pull out the team from numbness thus taking the lead of the set to 21-20. But sensing the danger, the Czech Republic recovered easily from the one-point lag as Havlickova balanced the score at 21-21. Romania responded with well-placed spikes by relentless Salaoru and Rogojinaru that briefly dismantled the Czech reception. But the Havelkova and Havlickova took the matter in their own hands and put an end to it all at 27-25.