Edwin Benne was appointed coach of The Netherlands men’s volleyball team in 2011 at a time when the country’s participation in international competitions such as the Olympic Games, the World Championship or the World League seemed an impossibility. The Netherlands are in Pool C together with Japan, Portugal, Canada, Korea and Finland. 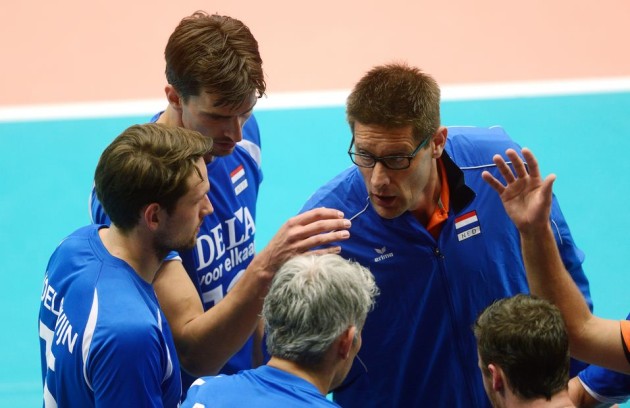 Having failed to qualify that year for the European Championship Benne decided to start from scratch, building a national team with a set of relatively new players. The team’s success came earlier than expected, resulting in The Netherlands’ return to the World League this year.

The year 2012 was a stellar one for the Dutch national team who qualified for the European Championship by winning the European League and then beating the Dominican Republic and Portugal to make their return to the World League.

Although The Netherlands have been absent from the tournament since 2011, they have a rich World League history. Since the founding of the competition in 1990, they have participated in 16 of the 23 editions, winning bronze in 1998, silver in 1990 and gold in 1996. Ironically, coach Benne played on the team that won silver in the 1990 edition of the tournament.

The Netherlands are in Pool C together with Japan, Portugal, Canada, Korea and Finland. After playing the first round in Canada, the Dutch occupy the third place in their pool.

To reach the final round in Argentina, the team will need to complete the Intercontinental Round in first place in their pool.   As coach Benne said, “Winning in Pool C is not a sacred goal for us. We just returned to this impressive competition so first let us try to reach our highest possible playing level. What result that will give us, we will know by the end of this month.”

The Netherlands will play Japan, their first opponent in Apeldoorn this weekend. Japan, is quite an unknown team for the Dutch and Benne and his men know Portugal a lot better, as they beat them twice last year on their way to World League qualification. After the withdrawal of Egypt, the Portuguese are back in world’s most prestigious competition.

“Japan is famous for its fast, quick game,” says Benne.  “We will focus on that as we prepare for them. That we won two times in five sets played against Portugal last summer shows how equal our teams are.”

Playing in Omnisport is something Benne appreciates. “Apeldoorn and its region is known  for its volleyball tradition,” said the Dutch head coach.  “I hope fans from our whole country will come to Apeldoorn to cheer for us!”