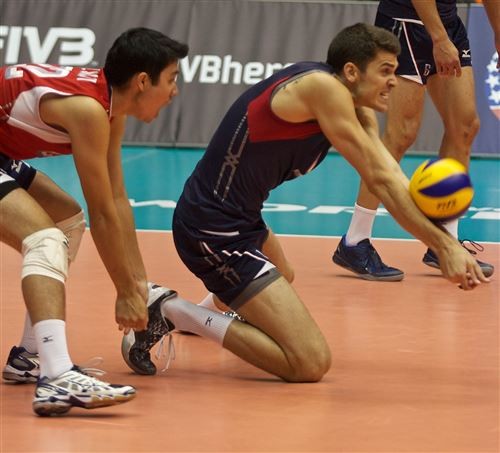 Matt Anderson, player of the match vs. Argentina

The Americans had lost the first encounter, also in Wichita, so both teams in Pool A finished their first weekend of WL  with 1-1 records.

With Argentina leading 21-16 in the first set and rached 23-16. United States came close to 23-22. Argentina called timeout and Sebastian Solé blocked a Murphy Troy attack to win the set for Argentina, 25-22.

Argentina took a 15-10 lead in the second set  and had advantage 16-13 lead at the second TTO. Argentina reached set point first at 24-23, and than a second set point at 25-24, but the Americans were still in the game. Paul Lotman scored with a kill to give the United States the 27-25 win.

Argentina had a good opener in the third set, but the U.S. team thanks to Matthew Anderson won the set with 25-19.

The United States led 16-12 at the second TTO of the fourth set . Carson Clark was brilliant in this set with a good serve and kill. His successful attack was the last point of the match.

The United States’ was Matt Anderson named the player of the match. He led all scorers with 18 points on 14 kills, two blocks and two aces. David Lee and Paul Lotman each added 11.