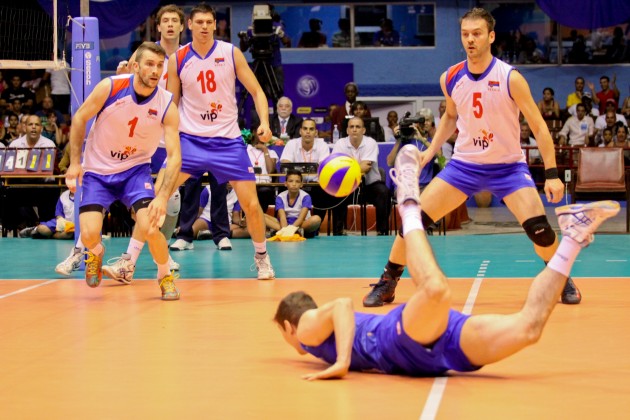 Serbian team in Havana on 2nd game against Cuba

Serbia coach Igor Kolakovic placed Marko Ivovic as attacker-receiver instead of Nemanja Petric, while the hosts, despite being defeated on Friday, had the same starting players.

The initial set was hard fought and the Cuban team was ahead until the final stages, but Serbia knew how to overtake them. Led by Aleksandar Atanasijevic’s power – 10 spiked points – Serbia edged the first set 26-24.

The second set was also even but the Europeans were ahead from beginning to end. Both teams increased the number of mistakes they made, but the visitors took greater advantage of the situation. The visitors were led by Atanasijevic and Ivovic, while Yordan Bisset and Rolando Cepeda did well for Cuba.

Cuban had their moment of glory once more in the third set, playing more aggressively and more creatively, led by Bisset’s powerful attack (six points) and Cepeda’s experience. Cuba coach Orlando Samuels Blackwood changed his starting setter, Lian Sem Estrada, for Leandro Macías and the move worked well for his team. The coach also sent Danger Quintana to the bench; he was replaced by David Fiel.

The match went to a fourth set and Serbia rediscovered its form while the Cubans made repeated mistakes in service and spiking.

The top scorer in the match was Atanasijevic with 21 points, followed by Bisset and Cepeda, who scored 16 points each.

Next weekend, the Cubans will meet the Italians in Turin and Florence, and the Serbians will face the Russians in Kaliningrad.

NORCECA W: Women’s Pan American Cup is about to start