Argentina opened the Movistar Women’s Pan American Cup with a straight-set (25-23, 25-21, 25-15) victory over Puerto Rico in action of Pool A at Coliseo Miguel Grau on Monday. Paula Nizetich led Argentina with 14 points followed by Lucia Fresco and Emilce Sosa with 11 and 10 respectively. 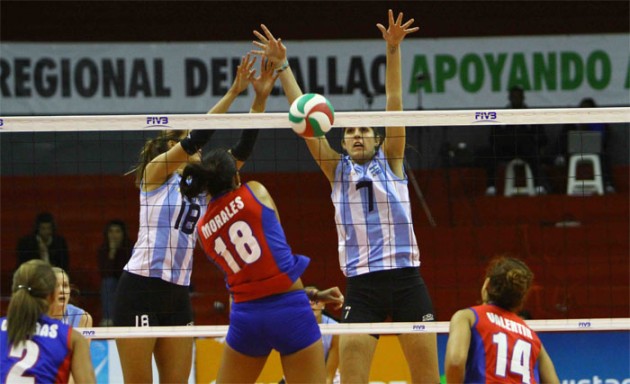 Argentina held advantages of 13-9 in blocking and 6-2 in aces. Both teams gave away 20 points via unforced errors.

Argentina’s coach Guillermo Orduna considers the Pan American Cup 2013 as a big challenge for his team because of their lack of international matches recently: “I hope we can increase our level with the upcoming matches,” he said. “We don’t have a lot of power in the attack so we needed to work starting from the serves.”

“Argentina based their tactics in offensive serves and the blocking,” Puerto Rico’s Rafael Olazagasti said. “They landed points when needed to decide the first two sets. I tried with some changes but didn’t work.”

The Argentinean Nizetich considered Puerto Rico didn’t play up to their best and “Our blocking was the key for the victory.”
“It was an excellent game for Argentina but we also made too many mistakes,” Puerto Rican Yarimar Rosa said. “I hope we can improve in our next matches.”

To read more news from this competition click on Pan American Cup 2013 W.

PANAC W: Return of Bricio for Mexican victory over Colombia

KOR M: With Simon and Song nearby,...