After losing their opening game to Belgium on Thursday, the home heroes of Austria could celebrate their first win in prelim Pool A of the 2013 CEV Volleyball European League as on Friday they edged their neighbors from Slovakia 3:1 at Budocenter in Vienna. Austria needed 91 minutes to score a much deserved win for the joy of 350 supporters. 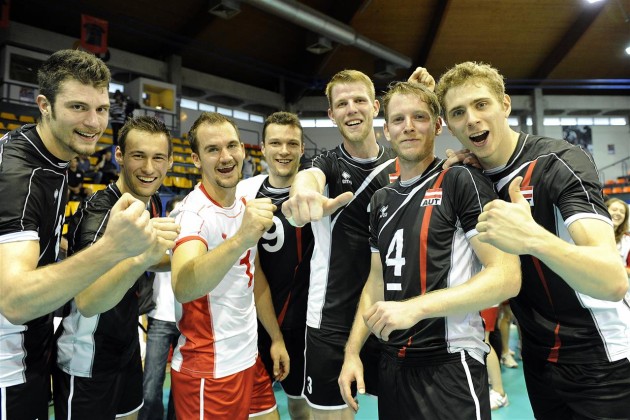 “It makes fun to watch my guys play Volleyball as they did tonight” says Austrian mentor Michael Warm. “They always play with great intensity and glowing hearts but sometimes they are not really rewarded for this. However, it is just wonderful how they regrouped and played today. We have invested so much in the past years to compensate for the gap from the European elite and it is great to edge Slovakia that finished fifth at the last edition of the European Championship”.

“Austria confirmed yesterday’s good performance with Belgium. They served well, defended a lot and they caused us problems with their good combinations. On the other hand, we could not score the big points” stresses Slovak head coach Stefan Chrtiansky. “This made the difference tonight and Austria deservedly won the game”.

In their winning effort the home heroes were paced by Thomas Zass and Alexander Berger who registered 18 and 13 points respectively. Three Slovak players finished the game in double digits, with Peter Michalovic top scoring with 14 followed by Emanuel Kohut and Stefan Chrtiansky jr. with 13 and 11.