The first match of the FIVB Women’s U20 World Championship in Kajot arena on Friday saw Chinese Taipei defeating Peru in a thrilling five set. Wing spiker Angela Levya was the nightmare of Chinese Taipei, having often found a perfect way to hit the Mikasa from the left side of the net getting 25 points. 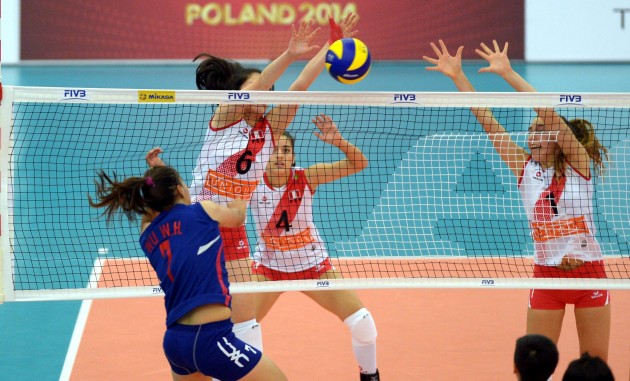 Wing spiker Angela Levya was the nightmare of Chinese Taipei, having often found a perfect way to hit the Mikasa from the left side of the net getting 25 points. The speed of their game helped Chinese Taipei to get the third and the fourth set: they even performed with an increasing grit in attack to enter the tie break.

The last game was mainly guided by Peru, however Chinese Taipei showed all their passion staying just one or two steps behind them. The small advantage was managed by the South Americans almost until the end, when the 14-14 marked by Chinese Taipei opened the very last battle.

The match point was marked by team captain Wei-Hua Wu (15 points for her), leaving Peru’s players with a lot of regrets and Chinese Taipei with great smiles and 22 points for I-Mei Hsu.

Peru captain Ginna Lopez: We hoped to win this first match but we didn’t play as a team. Anyway we are confident about the next match.

Peru coach Natalia Malaga: We played not as a team but as single players. We had not to think about our opponents, we did it too much and as result we didn’t focus on our play. We hope we will do better the next match.

Chinese Taipei captain Wu Wei-Hua: We are really happy for this victory, we didn’t expect it at all.

Chinese Taipei coach Chung-Jen Lo: I am proud of my team, I direct them from the bench tactically and they did exactly what I asked. Now we hope to win also the next match.