In the evening session of the opening day for the second round of action in Pool B, the hosts of Serbia were downed by the yet unbeaten Belgium 3:0. Lise Van Hecke of Belgium topped the scorers’ chart with 12 points, while Jelena Blagojević and Adela Helić were the most efficient ones for the home team with 7 apiece. 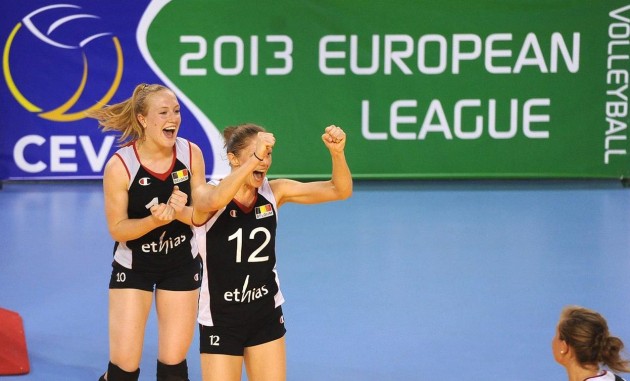 Serbia opened the match well with an early 7:3 lead, but then Belgium started to wake up and soon reached the tie at 10. After that, the Belgian side went ahead at 14:12, and from that moment on the hosts did not manage to win any more points. Belgium wrapped up the first set with an astonishing 7:0 run for the final 21-12.

In the second set, Belgium continued with their dominance. After an early 7:3 lead, Serbia managed to cut the distance to just one point at 13:14, and even reach the tie at 20 by the end, but the Belgian ladies were more focused in the decisive points and finished the job with two consecutive points for the 22-20 and 2:0 in sets.

The teams were pretty matched at the start of the third set. Serbia went two points ahead at 5:3, but Belgium tied the score right away at 5:5, and later at 8:8. After 10:8 to Serbia, the head coach of Belgium, Gert Vande Broek, had to ask for a time-out. Serbia managed to keep the distance for a while, but then Belgium tied at 13:13 and 15:15. After a time-out called by Aleksandar Vladisavljev, head coach of Serbia, the home side pushed once again and went two points ahead at 18:16.  After yet another tie, this time at 18, the hosts lost their confidence and Belgium reached two match points (20:18). They used the first one for sealing the 21-18 and the final 3-0 in sets.

Aleksandar Vladisavljev, head coach of Serbia: “We started the match well, but then we lost our confidence. We wanted to do a lot better than this, but for some reason we could not stand the pressure. I am sure we will do much better in the next matches.”

Jelena Blagojević, team captain of Serbia: “Yes, we felt the pressure; that is true. But, there are no excuses for this loss. We play badly today, especially in reception and attack. On the other hand, Belgium played a well organized game and they deserved this victory. There is no time to cry over this, we have more matches ahead and we have to regroup and do our best to win as many matches as we can.”

Gert Vande Broek, head coach of Belgium: “It is not always like it seems. In Belgium we were a little bit nervous, and now we are completely relaxed. Maybe it is the same case with Serbia, who certainly felt some pressure for playing at home. Anyway, it was not easy today. The sets were pretty even, and we are very happy with yet another victory. There is a lot more to play in this Pool, and we are eager to compete.”

Charlotte Leys, team captain of Belgium: “Ilka (Van de Vyver) played an excellent game today. Congratulations to her. It was very difficult to play in such a warm sports hall with 37 degrees, I believe, but we did the job. I am proud of my team and I am sure that we will continue the same way.”