The Karch Kiraly era as head coach of the USA Women’s team could not start a better way: One Pan American title, a dream team staff, and a group of players with a great potential. He succeeded Hugh McCutcheon at the end of the 2012 London Games. Reed Sunahara and Robert Browning are in his technical staff. 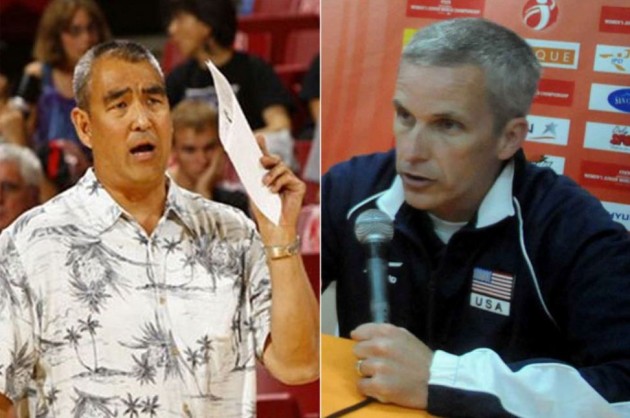 One year ago, the legendary Olympic multi-medal winner in volleyball and beach volleyball succeeded Hugh McCutcheon at the end of the 2012 London Games.

McCutcheon began a new stage in his coaching career at the college level when he took over the job with the University of Minnesota, after leading the U.S. Men’s team to the gold medal in Beijing 2008 and the Women’s Team to a silver medal in London.

“Everything we do in terms of preparation for this Olympic cycle will be important. The credit for this result is for this staff,” Kiraly said after grabbing the gold medal at the Pan American Cup in Peru.

When McCutcheon and Kiraly were preparing for the Olympics in London, Sunahara had a second team in Ciudad Juarez, Mexico, where he won the Pan Am Cup of that year after defeating Brazil.

Sunahara’s team result in Juarez granted a spot for the United States at the FIVB World Grand Prix of 2013. A few days later Sunahara had another mission to accomplish: To coach the U18 unit and to qualify to the age-group World Championship of Thailand.

He not only qualified that team as the UCLA alumni won the NORCECA Continental crown with a group of high school girls who traveled to the city of Tijuana for that competition.

Sunahara also had a special achievement: He won two international championships with two different groups in different categories in less than one month and both of them were achieved in Mexico.

“It’s a great honor to represent USA Volleyball. I’ve coached at every level and various USA teams, but this is an unbelievable opportunity to coach the best athletes at the highest level,” he said when after his appointment as assistant coach of the senior team and part of Kiraly’s staff last February.

Besides Sunahara, who graduated in 1989 from the University of California in Los Angeles, there is Robert Browning.

Browning coached the Women’s Junior’s national team in 2010 and also qualified that USA team to a world championship, when the U20 unit played the NORCECA Continental Tournament celebrated in Tijuana.

His team clinched a berth for the age World Championship that was played in Peru in 2011 and finished among the top four.

“They deserve that credit, is part of the hard work, part of a good preparation and we are really glad for this cycle that will close with the Olympics in Brazil, that’s something really exciting,” expressed Kiraly about the chemistry within his staff after winning the Pan American Cup final, just like in 2012.

In Volleyball, he won two at the Games of Los Angeles 1984 and Seoul 1988. He also won in Beach Volleyball at Atlanta 1996, ten years after winning Volleyball World Championship in Paris, France.

Even his teammates were amazed! David Lee...