The 2011 European silver medallists of Germany opened the second round of action in Pool B with a flawless victory against Israel 3:0 after 57 minutes of play. Berit Kauffeldt of Germany and Anna Velikiy of Israel topped the scorers’ chart with 10 points each. 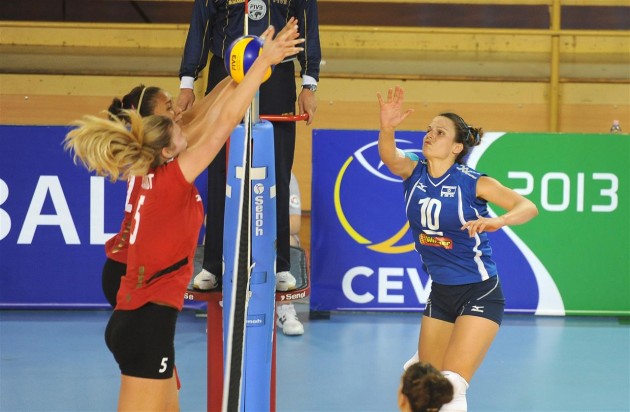 Throughout the whole match Germany was the dominant side. Israel, without their best players, did not pose a threat to the strong German team. Only in the third set they managed to show some resistance. In each set Germany were taking off to an early lead, and right from the start it was obvious that the Israeli ladies could not compete on the same level with their rivals. In the end, Giovanni Guidetti gave a chance to some younger players who successfully wrapped it up for an impeccable 3:0.

Giovanni Guidetti, head coach of Germany: “I gave the opportunity to younger players to feel the atmosphere of the game. We expected a more difficult match, but we played well today even though our line-up consisted of backup players.”

Kathleen Weiss, setter of the German team: “We are very happy because we have a lot of new players and they are doing fine. That is good for the team.”

Arie Selinger, head coach of Israel: “It is not a shame to lose, but it is a shame not playing good. We played well only in the third set, and why we did not play like this in the first two sets, I cannot really explain.”

Moran Zur, team captain of Israel: “We are not satisfied. We can do a lot better. We are playing with a young team, and we need to improve a lot and try to do better in the next game.”

WCHJ W: Japan get their first win at the U20 World Championship beating Thailand