It took five sets but Belgium could eventually stretch their winning streak to five matches in a row in prelim Pool A of the 2013 CEV Volleyball European League – Men. Belgium could edge Austria (21-14, 19-21, 17-21, 21-14, and 17-15) at the end of a real drama to keep the top position in the standings of the group. Read latest volleyball news on Worldofvolley.com. 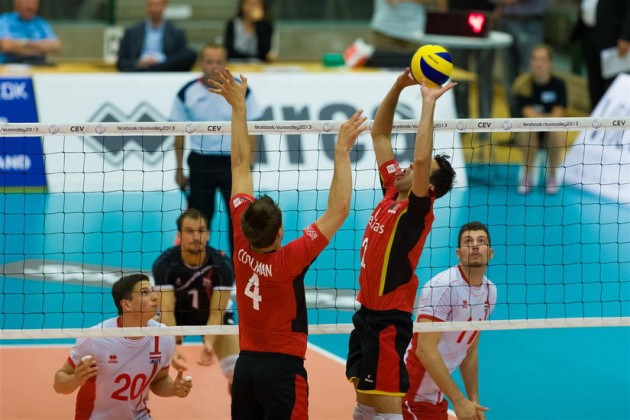 The first set was very close in the early phases before Belgium slowly but surely opened the gap (8:4, 12:5); their lead reached 8 points by 17:9 before Alexander Berger stood out for Austria from the serving area and reduced the gap to five (17:12). After a time-out asked by their head coach Dominique Baeyens, Belgium got back on track and could finish the opening set at 21-14.

After another close start (5:5), Belgium – similarly to what had happened in the first set – got control of the operations leading by seven points at the technical time-out. However, Austria was able to fight back and did level the score at 16 all before moving to the front (18:17). Austria could cash the provisional 1:1 (21-19) by exploiting their first set ball.

“Things changed suddenly in the second set where we dissipated our lead and started making many mistakes in attack” says Belgian mentor Dominique Baeyens. “In the third set we looked very frustrated and this is also due to the fact that Austria played superb and showed great momentum. Their serve was excellent while we did not play our best Volleyball. However, we did not stop our fight and in the end what is important is that we came back and could extend our positive series”.

Austria had indeed started out very strong in the third set (4:1, 7:5) and got a margin of two by the technical time-out. Belgium was forced to ask for a time-out after Aleksandar Blagojevic – who registered 26 points in the end – had scored for the 16:12 but even though Belgium could reduce a bit the gap, still Austria was in full swing and could go for the 2:1 (21-17).

The tie-break did see a close start (6:6) before Belgium went up 8:6 as teams changed sides of the net. After another tie at 8, Simon Van de Voorde restored Belgium’s lead (10:8) but Austria could even the score once more at 12. Belgium got a first match ball at 14:13 but needed two more before cashing that hard-fought victory at 17-15.

“I am glad that we won but we should have closed the match earlier” Van den Dries says. “We had to fight hard for this win for Austria played really well. They served great and this made it tough for us. We showed nevertheless our strength in the key moments where we could turn things into our favor”.

FIVB and Qatar have development as common...