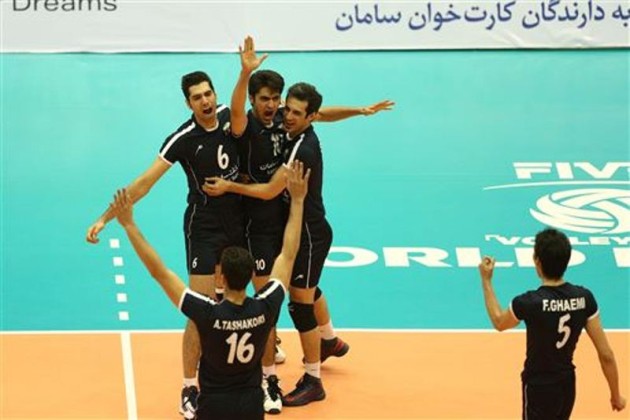 Loyal fans packed Tehran at Azadi hall to watch the Pool B match while others tuned into sports radio and TV, which has helped awaken national sense and enthusiast Iran’s volleyball team, creating support for the team’s ability to defeat their rivals.

Iran reduced personal mistakes and improved its ability for Sunday’s defeat over Serbia.

In the first set, Iran took command of the game immediately. Serbia had problems passing Iran’s blocking, and Iran finished the set victory 25-20.

In the second set, Serbia was determined not to give up, and fought hard to close the set 26-24.

The third set was running in favor of host team as they showed high keen in gaining scores , by 8-5 got the first technical time-out. Serbia got use from weak dig of Iran by sharp spikes and made gap wider by 19-16. Iran’s solid blocks and hard spikes narrowed the scores gap 23-24. But after a timeout by Serbia, the team secured the win at 25-23.

Set four started with Serbia leading 8-6. Moments were passing slowly for home fans as Iran led 23-22. A service by Mousavi after touching the net came down in Serb ground at 25-22, and Iran won the set.

Iran was motivated in fifth set after improving their service and spike. Spikes by Fayazi and two blocks by Gholami made the scores 13-10 for Iran. Three substations by Serbia was not effective, and Iran won the set and game at 15-12.