Panama underlined their dominance of Group N of the Second Round of the NORCECA Women’s 2014 World Championships, here at the Laborie Indoor Facility, with a commanding 3-0 over Haiti to win the gold medal. 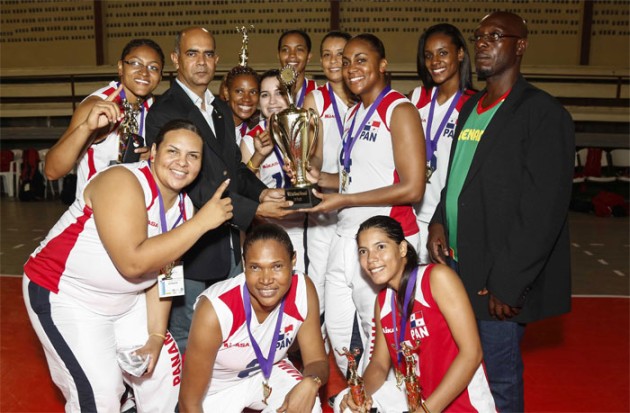 The Panamanians were celebrating as early as the beginning third set, after taking sets one and two, confident of pouching the top spot.

And, despite Haiti‘s resistance in the first two sets, the  assured Panamanian  women went on a scoring spree in the third set, reveling in a 15-0 run that took the stuffing out of their opponents’ fight.

The Panamanians led by their captain – Joanna Arroyo, who finished with a game high fifteen points, and there were nine points each for Hashlyn Cuero and Suany Terreros, were aggressive at the nets, unleashing some powerful spikes, which went unanswered by the Haitians.

Completing the tournament with a 4-0 win/loss record, Panamahad emerged tops in the Group G of the first round, held last year on home soil.

Commenting on the championship match- Panama’s team Captain – Arroyo said: “We were determined that we were not going to lose any set tonight and that we did…Tonight’s game was unexpected as we thought Haiti was going to come harder at us, but we talked about before the game made us as a team change”.

But Arroyo said they are bracing themselves for the more competitive third round.

“We know the next phase will be challenging as we will be playing against teams with a higher ranking than we…We  recognize that , so we know we have to prepare for that“, Arroyo projected.

Despite having to settle for the runner-up spot, Coach of the Haiti team – Frederic Francois said achieving third round status for the first time brought them much gratification.

Francois thought his players lost their way in the third set, after putting up a challenge in the first two sets.

“We started well but the girls put a lot of pressure on themselves …. We lost the momentum and Panama took charge and we could not get back”, Francois admitted.

With Group N, the last of the six to be decided, Panama joins other five first places – Curacao, El Salvador, Guatemala, Nicaragua and Trinidad and Tobago in round three.

Meanwhile takes company with the runners-up – Barbados, Guadeloupe, Jamaica, St Lucia and U.S. Virgin Islands gaining berth to the next round.

The next entrant will be the best third place from the six groups of qualification, according to the rankings in January 2014.

They will be entered along with top ranked NORCECA teams the United States of America, the Dominican Republic, Cuba, Puerto Rico, Canada, Mexico and Costa Rica, as they seek to be among six places destined for Italy in 2014.

WCHJ W: “We improved our level during the match”, says Dominican Republic captain