The only two teams still unbeaten will put their records on the line during the fifth weekend of the FIVB World League Intercontinental Round, which starts on Friday. This and other volleyball news read on Worldofvolley.com. 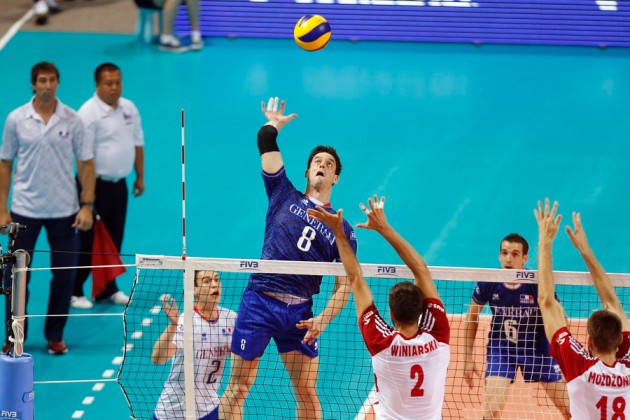 Record World League champions Brazil will take on France in Sao Paulo on Friday and Saturday. The French come into the games on the back of two notable victories against defending champions Poland. “The team spirit is our main strength. The players give all their heart and all their resources to win,” said French coach Laurent Tillie.

But will that be enough against Brazil? The South Americans have had a weekend off and remain unbeaten in four games in Group B – as do Bulgaria (both 11 points).

With the qualifying round reaching a crucial phase, Bulgaria coach Camillo Placi’s team faces last year’s World League finalists USA (eight points) in Reno on Friday and Saturday. The new-look American team has three wins to its name and, therefore, is well positioned to secure one of the two tickets on offer in Group A for the Finals of the World League, which take place from July 17 to 21 in Mar del Plata, Argentina.

With their chances of defending the title they won last year all but over, the Poles are surprisingly still seeking their first win of the competition. “Never give up, we still fight until the end,” tweeted Poland’s coach Andrea Anastasi. The Poles will be optimistic about their chances in this weekend’s home matches against Argentina. Six games into this year’s World League, the Gauchos have only one win to their name. As hosts, however, Argentina have already booked their ticket for the Finals.

In Pool B, leaders Italy (15 points) are currently in pole position, after the Azzurri picked up four points from the two away matches against Olympic champions Russia. The Italians are expected to take another two steps towards the Finals in Modena on Friday and Sassari on Sunday, when they host World League debutants Iran, who celebrated a historic maiden win in the competition against Serbia last weekend. “We have already learned a lot in the World League and now want to make life difficult for another top European team,” said Iran’s star coach Julio Velasco after the confidence-boosting victory.

The second-placed team in Group B, Olympic champions Russia (13 points), cannot afford to slip up against the winless Cubans when they travel to Havanna. Hot on their heels and ready to pounce are Serbia (10) and Germany (seven).

The two hunters go head-to-head in Nis on Saturday and Sunday. “We want to close the gap on the front-runners,” said German coach Vital Heynen. However, hosts Serbia remain favourites to win at home.

Pool C, in which only the top team will travel to the Finals in Argentina, is as dramatic as the other two groups. All six teams could theoretically still win their place in the spotlight. Leaders the Netherlands (13 points) travel to South Korea (seven points), where the hosts could pull level on points with two clear victories in Yugwansoon. Back in the chasing pack, Finland (nine points) take on the impressive Canadians (12) in Tampere. And Portugal (seven) will be out to keep their slim chances of reaching the finals alive against Japan (six), who recently ended their winless streak in volleyball’s most prestigious league with two home wins against Finland.

WCHJ W: Mexico had no chance, Turkish girls in quarterfinals

WCHJ W: “We are looking forward to the quarterfinal against Brazil” says Serbia’s Lukic