After surprisingly losing to Spain on Friday, the Czech Republic got back on track on Saturday in the second day of action for leg 3 of the 2013 CEV Volleyball European League – Men. The provisional leaders Pool B claimed their seventh victory out of eight matches by edging Hungary 3:1. Spain defeated Montenegro 3:1. 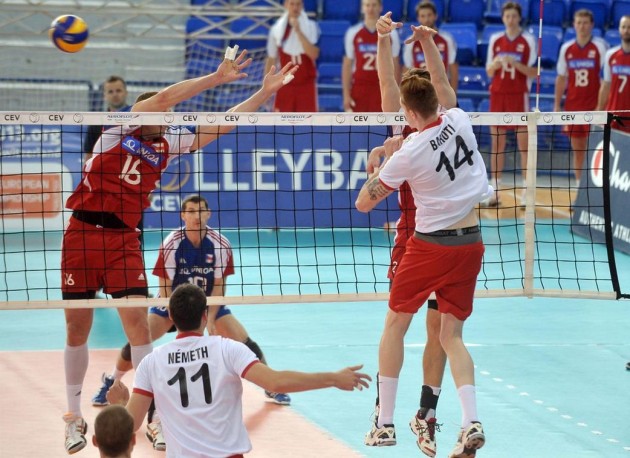 The first set was an easy run for the Czechs who did play with their second setter Ondrej Boula (21-11) before Hungary missed out on a set ball in the second set and the guys around head coach Stewart Bernard made it 2:0 (22-20). The third set followed a similar plot but this time Hungary did not dissipate its chances and could bring it home at 21-19. However, that was all for the side mentored by head coach György Demeter as the Czechs dominated the scene in the fourth set wrapping it up at 21-12 for a well-deserved 3:1 win.

In the other match of the day and to follow up on Friday’s win over the Czech Republic, Spain beat Montenegro 3:1 (21-19, 24-22, 18-21, and 21-18). Spain started out by showing the same quality they had displayed against the Czech Republic and claimed the two first sets after a couple of close final rushes. In the third set Montenegro played much better after head coach Nikola Matijasevic decided to change opposite player Marko Vujovic with Rajko Strugar while Luka Babic replaced Aleksandar Minic. Montenegro claimed the third set but in the fourth it was Spain that dictated the pace of the game all the way through to compensate for the losses they had suffered to the Montenegrins in the previous legs of the competition.