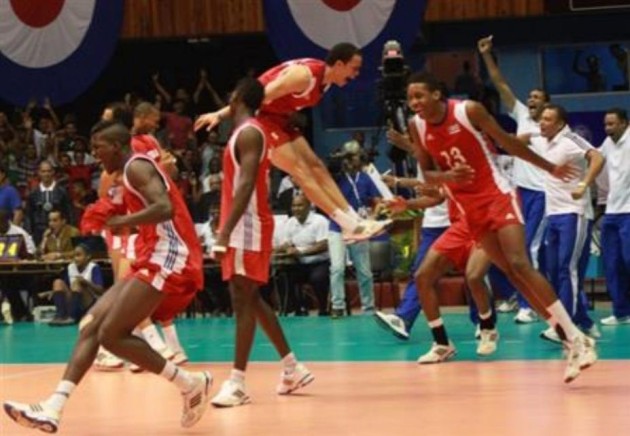 Nikolay Pavlov and Yordan Bisset topped the scoring with 19 points each. Isbel Mesa got five points from blocking.

In front of their enthusiastic fans, the young Cuban squad came out fighting as they sought their first victory in this year’s World League. The two teams traded points early on but Russia were 8-5 ahead at the first technical timeout. Cuban Rolando Cepeda’s strong spikes helped bring Cuba back into the game and a Yordan Bisset ace tied things up at 12-12. Another ace by Bisset gave the lead to Cuba at 21-20 and a huge block by David Fiel lifted everyone at the packed Ciudad Deportiva Coliseum. Cepeda scored the final point in the set and the place went crazy.

Cuba started the second set aggressively. The twin towers of Abraham Alfonso and Isbel Mesa scored consecutive blocking points before a triple-blockade and another Bisset ace gave Cuba the lead at the first TTO (8-4). Abraham Alfonso then took over as the main man for coach Orlando Samuels, but Russia never gave up and saved balls that seemed lost. Pavlov was smart, Olympic Dmitry Ilinykh did his job and Cuba let a couple of spikes go out of bounds. Cepeda made two more points as Cuba led by a point at the second TTO, but the Russian supporters lifted their team and Russia took the set.

It wasn’t until the third set that Cuba were able to block Pavlov’s spikes. Cuba went 6-3 up and setter Leandro Macías gave the Russians a taste of their own medicine with a faint pass. Pavlov had 17 points so far, but Cuba had three players with double figures on attack. The hosts were three points ahead at each TTO and the crowd chanted “Yes we can” as they energized their team. Lefty Cepeda sealed the set with a well-placed spike.

Coach Andrey Voronkov calmed his players down. The Olympic champions focused and regained the organization that gave them an easy victory the previous night. There was some talk between the sides after a point won by Cuba, and referee Denis Céspedes showed a yellow card to Andrey Aschev for arguing. Russia were two points ahead at the first TTO but Cuba tied the set at 12-12. Pavlov kept pounding away and Russia were leading by a point at the second TTO before Cuba fought back to take the match on a score by Cepeda.

Cuban rookie Abraham Alfonso: “At first I was a little bit nervous; I felt some pressure, but later I got more comfortable on court. We got the result we were waiting for. Samuels told me to find the Russian setter and don’t mind about the centrals. The most important thing of all was winning our first three points.”

Russia coach Andrey Voronkov: “My players were tired because we spent tons of moral energy last night. Also we have a lot of players injured, so we couldn’t display our best level of play.”

Russian top scorer Nikolay Pavlov: “We started strong, but nothing worked out for us. There were some close plays that took our nerves. Cuba has a young team, with lots of potential. Maybe they need to take it easy, and they’ll be better players.”