World No. 1 China beat Brazil in a three-set semi-final game and thus entered the gold medal match of the 2013 FIVB Women’s U20 World Champs at Kajot Arena in Brno, Czech Republic. Ting Zhu and Gabriela Guimaraes were the top scorers. 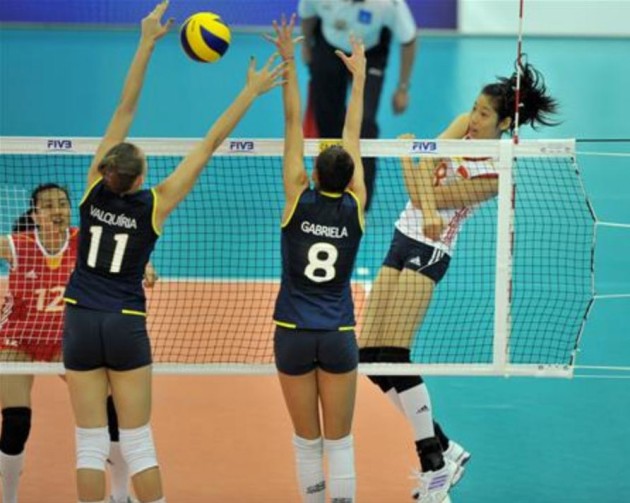 Ting Zhu from China scored 21 points and was the top scorer while the Brazilian star player Gabriela Guimaraes obtained 18 points mainly from her powerful spikes.

At 12-17 in the first set, Brazil coach Luizomar De Moura called his athletes off court to have a serious talk. Fangxu Yang and Xintong Chen had scored four service winners for China. The timeout did not help as the Asians continued their run with razor-sharp spikes and exemplary block-defence work. De Moura took off Gabriela and exchanged setters but it was already too late. China wrapped up the first set in style, 25-16. China had committed zero mistakes in the first period.

The serve was still one of China’s main weapon early in the second set as the world No. 1 literally blew away the Brazilian passers. Brazil’s setter Giovana tried her best to set up a fast game but could hardly use her middles for quick combinations. On the other side, China’s top scorer Ting Zhu led her team to a comfortable five-point lead at the second technical timeout. Two successful blocks from Fangxu Yang and Fengjiao Wang made it even worse for Brazil. China pulled clear, 25-16 again.

Compared to the two previous sets, there was not much to separate the two teams in the third set. Both squads showed spectacular defense kills combined with perfect-trained offensive variations. However, Brazil lost momentum in the crucial phase of set No. 3. Ning Wang scored for a 23-22 China lead before outside hitter Fengjiao Wang blocked Brazilian opposite Sara Silva twice to bounce China in heaven.