Bulgaria came back from Friday’s three-set loss to defeat the United States 3-1 on Saturday before a large and loud crowd at the Reno Events Center. Tsvetan Sokolov, Todor Skrimov, Matt Anderson and Carson Clark were the top scorers. 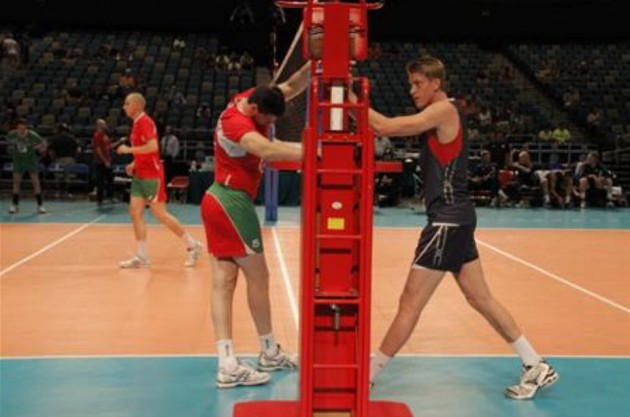 The victory improves Bulgaria’s record to 5-1 while USA falls to 4-2.

For the second night, Bulgaria’s Tsvetan Sokolov, who was named the Player of the Match, led all scorers with 21 points on 16 attacks and five blocks. Todor Skrimov added 12 points on 10 spikes and two aces.

In the first set, USA held an 8-6 lead at the first technical timeout. USA extended the lead to 10-6, but Bulgaria came back to tie the score at 12-12 behind some tough serving from Sokolov. A series of ties progressed but the USA got the better towards the second technical timeout. Bulgaria recovered from the setback and scored the final five points to win the set. Sokolov led all scorers in the set with eight points.

USA took a 9-5 lead to open the second set. Bulgaria came back with a spike and block from Sokolov. USA answered with an Anderson block. David Lee took the serve as USA scored four more points to lead 13-7. With the USA leading 18-10, Bulgaria made a three-point run to pull within five, but USA called timeout and Bulgaria’s next serve went out of bounds. The United States reached set point at 24-18 and Anderson used a kill for the victory. Sokolov was held to two points in the set while Anderson had five for the USA.

Bulgaria used strong serving, including two straight aces by Viktor Yosifov, to lead 8-3 at the first TTO. USA pulled to within three at 9-6, but Sokolov scored with a strike off the block and Bulgaria scored twice more to lead 11-6. It continued to lead 16-9 at the second TTO. With Bulgaria leading 23-17, the European side served into the net and Clark took the serve for the United States. He served for four straight points, including two aces, to pull USA to within one at 23-22. However, his next serve went into the net, giving Bulgaria set point. The North American side fought off the first set point with a Lee quick kill before Todor Aleksiev scored with a spike off the block to give Bulgaria the win.

The United States took a 7-4 lead to open the fourth set. Bulgaria came back to tie the score at 8-8. The scored was still tied at 13-13 when Bulgaria scored on a Sokolov spike and the American hitting error to lead 15-13. It led 16-14 at the second TTO. Bulgaria increased its lead to 21-17 and reached match point at 24-21, winning the match on another American hitting error.

Bulgaria captain Todor Aleksiev: “We had a good sideout at the end of the sets. We were very prepared to play the USA and that led to the good result. We tried to put Sokolov against Matt (Anderson) because he is a high spiker. We did that and we executed well.“

Bulgaria coach Camillo Placi: “Today was a more competitive match. We passed and blocked better. The USA team was struggling to find their rhythm. Compared with yesterday, we were much more mentally prepared.“

USA captain Matt Anderson: “When you beat a team 3-0, you understand that they’re going to come back with more fire and energy. I think they put together a good game plan against us and they executed it very well.“

USA coach John Speraw: “We knew Bulgaria was a much more capable team than they showed the first night. I think the biggest difference in the match is that they passed the ball well and they got themselves out of trouble at a higher rate.“