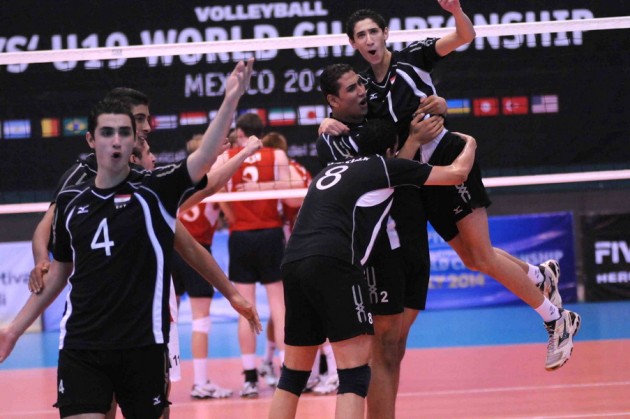 Mohamed Shehabeldeen scored 18 points for the Egyptian team while Eid Abouelsoud finished with 15, including four aces.

Saad Ahmed also had a solid performance for the African champions, by scoring 14 points, including three blocks and captain Ahmend Saleh closed with 10.

On the American side, Jacob Arnitz was the only player with double digit with 20 points.

Karl Apfelbach was the second top scorer for USA with only 9. After this match, Egypt finished with a 2-2 record on first round, while the United States stood with 1-2.

The loss against Egypt was the second for USA after being defeated by Brazil.

The team coached by Colin McMillan opened with a victory against Algeria (0-3), that will face Brazil (3-0) on Monday.

The head coach of Egypt, Ellakany Mohamed said that winning against a team like the United States was a very difficult achievement, but his players went out very concentrated and tried to define the situation since the beginning.

He compared volleyball with boxing. Every set is like a round. A team, like a boxer must get out strongly and fight hard. For USA coach Colin McMillan, there were some errors that must be adjusted for their next match against Korea and some substitutions didn’t work as expected to prolong the match and recover.

Ellakany Mohamed, coach of Egypt: “Nothing is written yet in this Pool and in this competition, somebody could be 1st, 2nd or 3rd in qualifying to the next round. We thank god for helping us in this very tough match. The boys were afraid, but they felt so confident by the end of the first set. That was the key. They saw they could make it.”

Collin McMillan, coach of USA: “Congratulations to Egypt. We faced a very well prepared team. A very energized team that played with passion. Unfortunately We were unable to control our errors.”

Ahmed Saleh, captain of Egypt: “We played a great match. It was too hard, but made a great effort. We wanted to play and get so far than usual, and We did it.”

Christian Blough, captain of USA: “On our side there were many errors. We just couldn’t get into the match.”