On Sunday evening Poland survived an initial scare and beat Argentina in four sets (18-25, 25-21, 26-24 and 25-17) in Gdansk, Poland in the closing game of the fourth week of the 2013 FIVB World League. This and other volleyball news read on Worldofvolley.com. 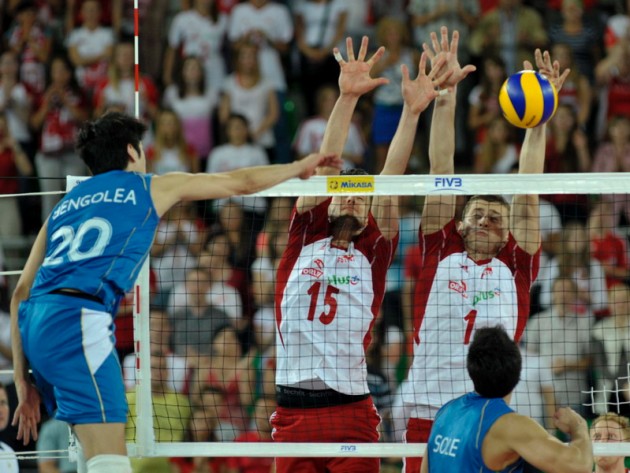 Michal Winiarski of Poland was named the MVP of the match (16 points), while Argentina‘s Ivan Castellani topped the scorers for his team with 13 points. Now, Argentina returns to the country to face in the last weekend of the Intercontinental Round, France in Salta next weekend.

Argentina started the match with a different line-up than on Friday – with stronger and more experienced players. This resulted in their good play from the first points of the first set. However, the guests managed to jump ahead to a three-point lead at the first TTO. They remained in control throughout the set increasing the advantage to seven points as Poland made many unforced errors. Argentina easily won the first set 25-18.

Set 2 brought a change in the hosts’ play – they started very concentrated and quickly jumped ahead to 6-3, forcing Argentina‘s head coach Javier Weber to call time-out. Highly motivated, the White-Reds increased the advantage to seven points (15-8), once again thanks to the powerful serves of Bartosz Kurek and Jakub Jarosz. The guests were unable to catch the opponents, regardless their impressive play in defense and the Poles picked up the second set 25-21 and set the overall score at 1-1.

In the third set the score stayed very close from the first points and neither team gained a desired advantage. The play continued on a point-by-point basis until the second TTO, after which the Poles with great effort managed to obtain an advantage (18-16, then 20-17). Argentina did not lose touch with the hosts, though, and tied the score at 23-23. Nevertheless, after a fierce fight it was Poland who celebrated a victory 26-24 and a lead in the entire match 2-1.

The hosts carried the momentum from the previous set and quickly gained advantage in the next one (4-0). Coach Weber called time-out at that point, which made Poland lose their focus and gave Argentina opportunity to level the score (7-7). Despite that, the Poles once more proved their dominance in serve as Zbigniew Bartman‘s hits gave them five-point leading ant 14-9 – he scored two aces and gave the opponents much trouble in reception with other serves. His teammates added strong spikes and the Argentiniens were helpless. They romped in to a victory 25-17 and took the entire match 3-1.

Argentina captain Luciano De Cecco : “We played three sets on a high level, but we weren’t able to continue to play so well later.”

Poland captain Marcin Mozdzonek: “I am happy about the score but also that we made another small step forward. Our play was once better, once worse, but we made it.“

Argentina head coach Javier Weber: “We played very well in the first three sets, but now we have to learn how to play so well for longer than one hour. We improved, but we still have to practice and try to prolong our good play.”

Poland head coach Andrea Anastasi: “I am really happy, because we finally got a three-point victory. We’re thinking about the next important matches against the USA now.”

WCQ W: Cyprus women through to World Championship third round