Slovakia will be hosting from Thursday through Saturday the last round of action in prelim Pool A of the 2013 CEV Volleyball European League – Men. Belgium already took visa to the final four scheduled for July 13-14 in Turkey. 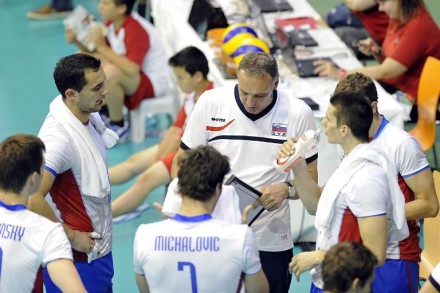 Head coach Stefan Chrtiansky with team on time out

Though nine matches will be played this weekend in Nitra, the results won’t have a major impact on the standing of the group with Belgium having already made sure they finish atop the table to qualify to the final four scheduled for July 13-14 in Turkey.

The players mentored by head coach Stefan Chrtiansky will open their home round playing Austria on Thursday at 7 pm before they complete their program taking on Denmark and Belgium. Slovakia is currently ranked second in Pool A where Belgium has got a perfect record of nine wins in as many matches.

Last week Slovakia scored two victories in Antwerp for what was their most successful weekend in the competition so far and the group was set to be joined by 17-year old Filip Gavenda for the home round in Nitra.

However, Gavenda suffered a finger injury on Tuesday evening and will hence be missing the matches in Nitra for he is out for two weeks. “We eventually had to scratch Filip from the list for this weekend and Matej Kubs was the last one to be added” Chrtiansky says.

As they have already pocketed their ticket to the final four, the guests from Belgium will be playing almost and exclusively to keep their clean record. “Every single match is important to us and we want to play our best tournament here in Nitra. Unfortunately we caught a slow start in this year’s European League; still we have been improving lately and I think we will be showing a good performance to our fans here in Nitra” Chrtiansky continues.

Slovakia will play Austria on Thursday as the two teams are separated by just one point in the standing. After losing twice to their neighbors in Vienna and Slagelse, the Slovaks could see Austria off this past weekend in Antwerp for the very first time this season. “I believe that we have broken this negative series with the Austrians. They are a tough opponent, with good skills. Last week we played with more confidence and consistency, especially in defense, and this is what we had to do tonight as well” the Slovak head coach adds.

Slovakia will be also missing Tomas Kmet who is currently nursing a back injury. “Tomas is a very important player for our team and due to his physical problems we have worked out a very specific and individual training program for him. I believe that he will be able to join the group in early August as we start our preparations for the European Championship” the Slovak head coach concludes.

PURE DOMINATION: This is how Kaziyski bombs...