On Monday Germany’s Federal Chancellor Dr. Angela Merkel will welcome the members of the women’s national team to her office in Berlin. 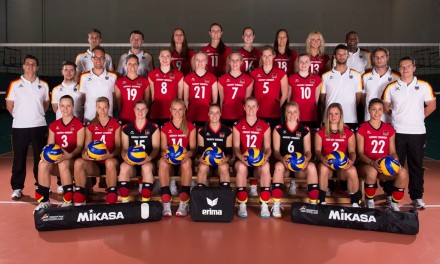 Dr. Merkel has placed the 2013 CEV Volleyball European Championship to be co-hosted by Germany and Switzerland through September 6-14 under her patronage and she wishes to meet the players to share some moments together and express her wish for an outstanding performance before they try to make it to the final round in Berlin.

Germany will fly to Berlin directly from Israel where this weekend the team will participate in the last round of preliminary action for the 2013 CEV Volleyball European League. On Monday the members of the team together with the coaching staff will then leave their training base in Kienbaum to meet with the Chancellor in Berlin. Right now 16 players compose the group but only 14 in the end will be retained for the European Championship.

Dr. Merkel prolongs a tradition of close cooperation between Germany’s highest authorities and the Volleyball family. Her predecessor Dr. Gerhard Schröder had indeed supported the 2003 Men’s European Championship and the 2005 Beach Volleyball World Championships while former Federal President Johannes Rau had placed under his patronage the 2002 Women’s World Championship whose final did also take place in Berlin.