On Thursday Belgium prolonged their amazing winning streak in the prelims of the 2013 CEV Volleyball European League – Men to 10 matches as the guys mentored by head coach Dominique Baeyens opened the last round of play in Pool A by seeing off Denmark in three straight sets (21-16, 21-12, and 21-10). This and other volleyball news read on Worldofvolley.com. 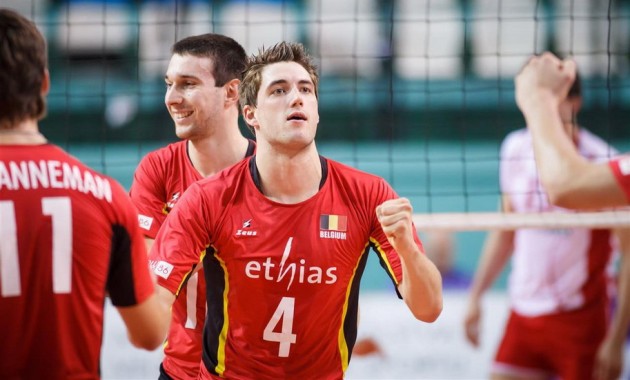 Belgium controlled the game from start until the end to take home another thee points standing out in all fundamentals. Bram Van den Dries paced Belgium with 15 points while Mads Ditlevsen was once again Denmark’s most prolific scorer with 13.

“That was the very first time since the start of the European League that we had an easy game. I think that the Danish players are getting tired as a result of the busy schedule we all had to stand in the past weeks” Baeyens said. “They have been always playing with the same starting six and group, so the fatigue is gradually finding its way. It was important, from our perspective, that the game was not that long and we could save energy. We stayed concentrated all through the match and I am satisfied with the performance delivered also by our second lines”.

“My congratulations to Belgium for they have a very good team and they played good” said Danish mentor Fred Sturm. “It is a very good experience for us to play the good teams we have crossed in the European League. We have been learning a lot”.

Later in the afternoon the home heroes of Slovakia also needed only three sets (21-18, 21-14, and 21-18) to edge their neighbors of Austria and cement their second place in the standing of the group.

Slovakia followed up on the good impression left last week in Belgium and bagged another three points. Milan Bencz paced the winning side with 11 points while Thomas Zass of Austria top scored in the game with 14.

“It was a good game and all players delivered a good performance. However, I would like to single out our opposite Milan Bencz who was our best player today even though he has been suffering an injury on his Achilles heel. We did not start that good but we improved and are happy with the win” Slovakia’s head coach Stefan Chrtiansky said.

“We started good but we lost control of the game quite quickly and did not find any consistency in attack. We were playing under pressure all the time and had difficulties with our offensive game” added Austria’s mentor Michael Warm.

Where Mia Jerkov is going to play...