EL: This weekend Final tournaments in Varna and Marmaris

After the preliminary round was completed this past weekend, Europe’s Volleyball fans can barely wait for the last stage of the 2013 CEV Volleyball European League coming up this weekend in Marmaris, Turkey (men) and Varna, Bulgaria (women). 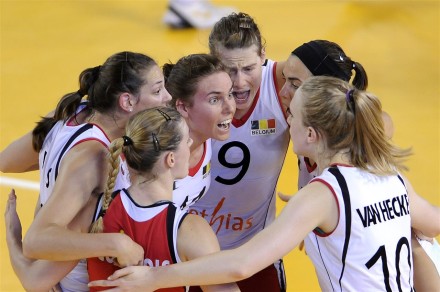 Belgian team is the real sensation of the women’s competition

The winner of the men’s competition will get the right to join the Intercontinental Qualification Round for next year’s FIVB World League coming up later this summer while the gold and silver medalists from the women’s tournament will automatically qualify for the next edition of the FIVB World Grand Prix.

The ties for the semis were determined by the DOL held on Monday morning in Luxembourg. Belgium – the real sensation of the women’s competition – will open the program of the semis by playing Pool A runners-up Romania while last year’s silver medalists Bulgaria will take on 2011 European vice-champions Germany who debuted this year in the European League.

The semi-finals are scheduled for Saturday, July 13, at 14:00 and 17:00 as over the weekend Varna’s Palace of Culture and Sports plays host also to a couple of World League matches starring the local heroes of Bulgaria and 2012 World League champions Poland.

The men’s final four in Marmaris, Turkey, will see the first-ranked teams from prelim Pools A and B, Belgium and the Czech Republic, cross their ways in the first semi-final where the guys around head coach Dominique Baeyens will try to prolong their amazing streak from the prelims where they captured 12 consecutive victories.

Hosts Turkey will play once more – as they already did so four times during the League Round – Pool C winners Croatia, the team that joined the competition only some weeks before the start of the prelims to replace Portugal.