Brazil looked strong and steady in their mission to qualify for the 2013 World Grand Prix Finals, picking up a 3-0 (25-16, 25-11, 25-20) win against Cuba in pool K on Friday. Gabriela Braga Guimaraes (BRA) stood out as the best scorer with a total of 10 points, followed by Fernanda Rodrigues (BRA) with 9 points. 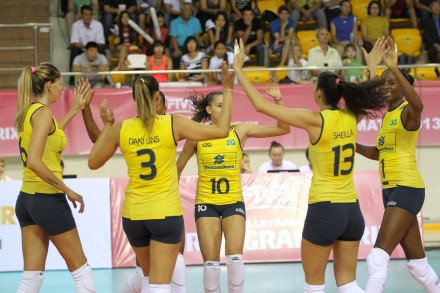 Brazil established their form and rhythm to take a commanding 8-3 lead at the first TTO. Cuba later became more aggressive in their offence, defying the commanding presence of the Brazilian blockers. Jennifer Yanet Alvarez Hernandez and 13-year-old Melissa Teresa Vargas Abreu worked hand-in-hand to provide the points, as Cuba narrowed the lead 13-14. Brazil then raced to pick up a quick three points. Captain Fabiana Claudino (BRA) scored back-to-back points, firing from the middle, and sending another quick point from the wing. Meanwhile, Cuba continued to misfire even to lose out to Brazil in the first set, 25-16.

Blocking was a huge factor in the second set, as the Brazilians posted good defence at the net, while the Cubans barely had any. Guimaraes tirelessly scored for the Brazilians, varying her strokes from powerful spikes, to delicately dropped balls.  Cuba managed to score several points but their defence on the floor and by the net was not enough to contain Brazil, who closed out the second set at 25-11.

Setter Danielle Lins carried on her commendable orchestration of the Brazilian offence, enabling hitters Guimaraes and Rodrigues to soar and score from the flanks. Cuba, on the other hand, dealt with issues on their consistency and steadiness of play. While they had brilliant moments from the attacks of  Vargas Abreu, Palacio Mendoza and Orta Alena Rojas, the Cuban hitters were not quick  nor steady enough to set up proper floor defence for the succeeding plays, to lose out, 25-20 in the third set.

Brazil will look to conquer their remaining opponents in Almaty. They face the Netherlands on Saturday 11.00 GMT (15.00 local) and hosts Kazakhstan on Sunday 14.00 GMT  (18.00 local), in the hopes of making their  10th consecutive appearance in World Grand Prix history.

GP: This was an important win for us – said Filipova

WCC W: One for the books occurred...