Two years ago, the Serbian Boys' U19 team were the World Champions in Argentina and now with the majority of the players continuing their international career with the Junior U21 national team they still have the passion to create a new era and stay in the podium at the Men's U21 World Championship due to start in Ankara and Izmir, Turkey on Thursday 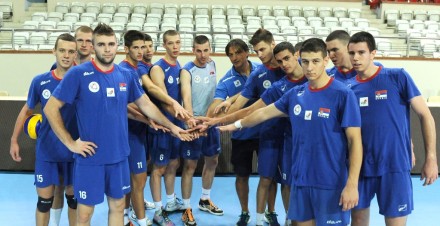 Seven players from the 2011 Youth World Champions (Kovacevic, Brdjovic, Katic, Stankovic, Okolic, Medic and Blagojevic) are still here in the Junior U21 team making over an extraordinary generation.

Serbia will line up against USA, Tunisia, Canada and Rwanda in Pool C in Izmir in their only second participation at this age category beside 5 other participations under ex Yugoslavia and Serbia– Montenegro names. The only Serbian participation under this name was two years ago when they captured the bronze medal in Brazil.

Head coach of the Serbia, Sinisa Reljic said that they started preparations since June for the Men’s U21 World Championship.

“We trained in Slovenia for 2 weeks. We played in the Balkan Championship and won the tournament against Turkey in the final,” Reljic said.

“After that championship we went back to Serbia and played 4 games against Russia. We had a productive time for preparation”.

Serbian coach thinks that his team is experienced enough for these world level competitions. “In the youth category we were the world champion. We have good players. Our players are experienced both at both local and international levels. All my team plays in the super league in Serbia,”

The objective of the coach is to qualify for the semi-finals. “It’s important to finish the pool stage at the first position. The teams are very tough here. USA, Canada and Russia are really good and well organized teams. However I believe we have more quality. We have the ability to win the games in our group”.

See the WoV Community profile of Serbia U21 team and coach Reljic.