WCHJ M: Abouzeid – “We want to do something good for our troubled nation”

As Egypt is one of the volleyball powerhouses in Africa, their team has been a regular participant in recent Youth and Junior World Championships, but in some ways the upcoming FIVB Men's U21 World Championship in Turkey is quite special for the Egyptian squad. Despite the news about deeper and deeper political division coming from their country, they hope to overshadow it with great performance in Ankara. 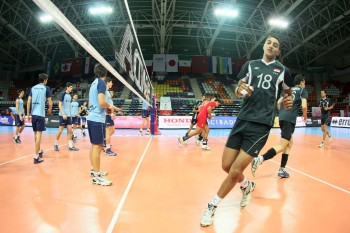 Egypt did not play any preparation friendlies so far, but had a chance to face Argentina in Turkey

Egypt’s best finish in the history of the competition is the 9th place from the 2003 World Championship in Iran.  Now their ambition is to top that.

”We come here as the second team in Africa and we hope to make it among the top eight teams in this World Championship”, head coach Gaber Abouzeid proclaimed.

However, as coach Abouzeid admitted, the reality is that the team did not get the opportunity to prepare appropriately for this World Championship.  In fact, they played their first friendly game this morning.  Egypt lost by 0-3 (17-25, 19-25, 23-25) against the team of Argentina in a joint training match at Baskent Hall in Ankara.

”Our preparation was not as complete as I would have liked and without any friendly games.  We are not very familiar with the level of most of our opponents,” Abouzeid said, but continued optimistically: ”We have a chance to see them in action before our first official match.  Our team is not bad and we hope to make a good performance in Ankara.  We want to do something good for our troubled nation.”

”We expect to play some strong games against the best teams in the world,” captain Islam Abdelkader added with an even longer-term portion of optimism.  ”We expect to gain a lot of valuable experience that would also help us in future championships.”

Egypt was drawn into Pool A at Baskent Volleyball Hall in Ankara, along with the teams of China, India, Morocco and host Turkey.  They do not have an official game scheduled on the first competition day on Thursday, August 22, so they will open their campaign with a match against China on Friday.