China had to fight hard to maintain their unbeaten record in the FIVB World Grand Prix Finals on Saturday as Japan fought them all the way. China won 3-2 (25-16, 18-25, 26-24, 21-25, 15-13) at Hokkaido Prefectural Sports Center and now face a showdown with Brazil on Sunday for the title. China are 4-0 and have 10 points, while Brazil have 12 points from a similar record. Serbia are third on six points and Japan fourth on four points. Italy are fifth with three points and USA bottom with one point. It was China’s 19th win over Japan in the World Grand Prix in 20 meetings. China set a team record for consecutive wins in the World Grand Prix at 13. Yukiko Ebata was the top scorer in the match with 36 points, while the top scorer for China was Zhu Ting with 33. Japan had the advantage in blocking points 10-9 and in service points 8-7. Japan made 23 errors to China’s 15. 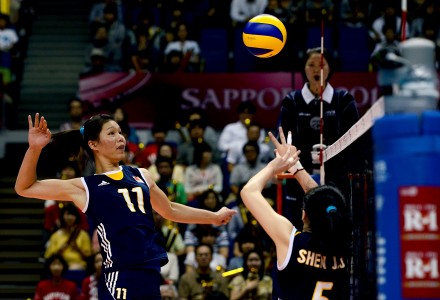 Japan looked shaky at the start of the match, committing two errors and failing to deal with a serve by Shen Jingsi that put China 8-3 up. They also struggled to deal with Chinese phenom Zhu Ting, who started banging down powerful shots and was soon joined by her teammates, especially Xu Yunli. Yukiko Ebata responded with a couple of clever shots, but China extended their lead to five points at the second technical timeout and it was largely one-way traffic from there on. A slam from the centre by Xu brought setpoint and Japan captain Saori Kimura fluffed a service reception from her Chinese counterpart Hui Ruoqi to put China 1-0 up. Zhu scored 10 points in the set.

Japan’s Haruka Miyashita aimed her first two serves at Zhu and she messed both of them up but she was soon back to banging the Mikasa past the Japanese players. But Japan started to play clever volleyball, placing the ball well on the Chinese side of the net. Risa Shinnabe came up with three points and Kimura two as Japan held a well-deserved four-point lead at the first TTO. Japan also started to rediscover its defensive skills, which deserted the team during Friday’s loss to Serbia. Kimura continued to play crafty volleyball and China were suddenly under pressure. Japan took a five-point lead at the second TTO after a good block by Nana Iwasaka on Yang Junjing. Ebata produced two spikes and a superbly placed soft shot as Japan moved into a 20-14 lead, at which point China coach Lang Ping called a timeout. It didn’t stop Japan. Ebata brought up setpoint with another good spike and China then failed to deal with a serve by Kimura, evening the scores at 1-1.

The match remained tight at the start of the third set and the two teams were even through 7-7. But then Japan went off the boil and started making errors. Kimura served long and then made a mess of a service reception to put China 16-10 ahead at the second TTO. Two good shots by Ebata and a service ace by Shinnabe helped Japan reduce a seven-point deficit to three points at 19-16 when Lang Ping called a timeout. Zhu came to the rescue for China with a couple of bombs, but Iwasaka responded with a block on Hui. China then failed to get a point overturned, Kimura hit a thunderbolt kill and Haruka Miyashita served an ace to pull Japan level at 22. At 23-22 to China, successive blasts by Kimura and Ebata brought setpoint for Japan. But Zhu evened the scores, Yang Junjing took advantage of poor Japan defending and a long shot by Ebata put China 2-1 up.

The intensity continued in the fourth set as the two sides swapped early leads. After the first TTO, with China leading by a point, Ebata and Zhu had a mini-battle, which Ebata won 6-3, but China led by two at the second break. A classy tipover by Shinnabe drew the teams level at 17 and Japan moved into a 20-18 lead on the back of a rocket by Kimura and a well-placed shot by Ebata, after which Lang Ping called a timeout. China then went to pieces and Japan led 23-18. An Ebata missile brought up setpoint at 24-19 but then Japan got nervous and coach Masayoshi Manabe had to call a timeout at 24-21. Ebata then hit a spike of the Chinese block to even the scores at 2-2.

Lang Ping had to call her team off after just three points of the tiebreak set with her team 3-0 down. Japan allowed China to get back into the game and it was all-square at 3-3. It stayed even to 8-8 when Japan made its third service error of the set and Ebata missed the target. A block by Xu on Shinnabe put China 12-9 up and a long shot by Ebata made it 13-9. Big hits from Kimura and Ebata kept Japan alive before a well-judged tipover from Hui brought matchpoint at 14-11. Ebata saved two more matchpoints but then was blocked and it was all over.