AUT M: Posojilnica happy with outcome of friendly against Cameroon

Austria’s Posojilnica AICH/DOB – who is set to debut this year in the CEV Volleyball Champions League – successfully completed a test match against the national Volleyball team of Cameroon. 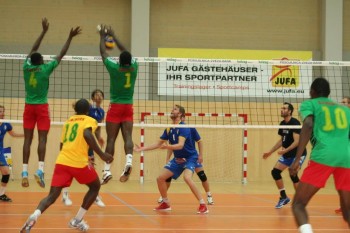 The first test match of the 2013/2014 season took place in Posojilnica AICH/DOB’s own sports hall; 400 supporters had the chance to track a Volleyball match which was coined by world-class and spectacular rallies.

Both the coach and the management were pleased with the achievements of Posojilnica AICH/DOB, especially when considering the short preparation time.

“I am satisfied with the team’s current performance since all players have been working vigorously to make great progress”, said head coach Johan Verstappen after the game, who added: “Cameroon is an extraordinary opponent – however, taking into account that three regular players from Slovenia and Slovakia were absent on that day, Posojilnica AICH/DOB can be more than proud of the final result!”

Next weekend Posojilnica AICH/DOB will compete in an international tournament, to be held in Bratislava, where head coach Verstappen and his crew will again try to tease one or the other excellent Volleyball team starring in Slovakia’s capital city.