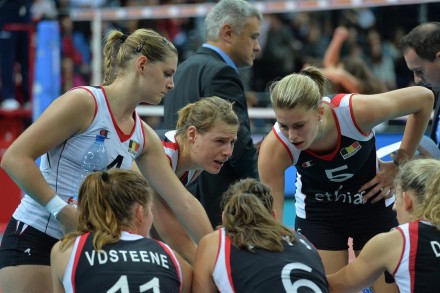 France wing-spiker Astrid Souply: “We feel a lot of deception of course. We missed this big opportunity only by some details. Belgium’s regularity made the difference today.”

Belgium middle-blocker Freya Aelbrecht: “I don’t like to play against France. I was like paralyzed in the first two sets and our blocks did not work as we wanted. The French were the better team during four sets. We said that we have to go and push ourselves for the tiebreak.”

France head coach Fabrice Vial: “On one side I’m really proud that we reached our goal. On the other hand, there is this deception as the semi-finals were that close. I would like to congratulate my players and my staff as they did a great job. With Alexandra Jupiter, Astrid Souply and Elisabeth Fedele we had three young players who played for the first time at European Championships.”

Belgium head coach Gert Vande Broek: “France played an amazing game today. We knew that the French would be a difficult opponent. They had nothing to lose. The fifth set is always kind of gambling. The French defence was like hell for us today. Now we are looking forward for a new challenge in Berlin.”

Check out profiles of Belgium and France.

ECH W: We worked hard for this – said Pankova

BUL M: Teodor Salparov will be a...