Italy’s Luca Cristofani envisions the new volleyball age-group category of players under 23 years old as a necessary stopgap in the maturation process of the athletes as they make the transition to the senior level. 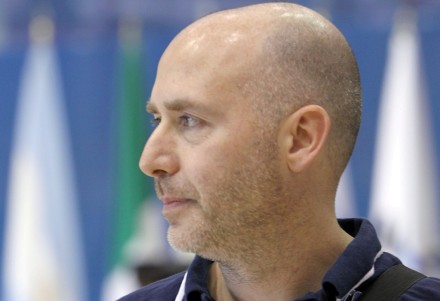 The veteran coach who is taking part in the inaugural FIVB U-23 Women’s World Championship at the helm of the Italy squad expressed his thoughts during a press conference held on Tuesday at the Baja California High Performance Center.

“A player from the junior ranks needs five or six years to mature into a solid player for the senior national teams,” Cristofani explained. “With this new age-group category you don’t have to rush them.”

“I think this U-23 category is a stage that was missing in the structure of development for our volleyball athletes,” he added.

Cristofani, who has been in Tijuana for several days now in a training camp along with Dominican Republic, Argentina and China, also commented on his expectations in the tournament to be played from October 5-12 in the cities of Tijuana and Mexicali.

“We are prepared for the competition and to play good volleyball,” he said. “I hope our team will be in the final four and I wish good luck to all the participants.”

Argentina’s Guillermo Caceres took a more conservative approach when he analyzed the possibilities of the Argentinean squad.

“Our plan is to continue adding up experience and learn from the powerhouses participating in this new competition,” he said. “The objective of Argentina is to give a good battle and to keep learning.”

China’s Xu Jiande followed the pattern of his South American colleague when took a brief turn at the microphone to comment about his team, with team manager the legendary setter Feng Kun serving as interpreter.

“I want to praise the organization for this type of tournament,” Xu said. “We will try our best to learn from each other and we hope to achieve a good result.”

Brazilian Marcos Kwiek, the coach of the Dominican Republic side produced splendid praise in his comments about the hospitality of the Mexican organizers.

“This is like our second home because we have had so many good times here,” Kwiek said. “Baja California is part of our history and I hope our players enjoy the tournament and can play at a good level.”

The facilities here are superb and the kindness of people and the level of organization is really wonderful so I want to thank everyone for the hospitality,” he concluded.

To read more news from this competition click on World Championship U23 2013 W.