WCHQ W: Israel, Hungary, and Switzerland all through to last stage

Though there is still one more day to go at the second round World Champs qualifier in Ra’anana Israel, Hungary and Switzerland have all already claimed the right to continue their campaign via the third and last stage of the qualification process for the 2014 FIVB Women’s Volleyball World Championship scheduled for early January. The results of the last matches coming up on Sunday may still impact on the top positions of the standing but with Saturday’s wins these teams have made sure they will finish among the top three of the tournament taking place at Metrowest Sports Palace. Switzerland opened the program of the fourth day by routing Latvia in straight sets (25-15, 25-14, and 25-23) before Hungary cruised past Montenegro with a similar score line (25-22, 25-17, and 25-15). At the end of the day, the home heroines of Israel had to fight hard but eventually beat Greece 3:1 (20-25, 25-21, 30-28, and 25-23) to keep an immaculate record of four wins in as many matches. 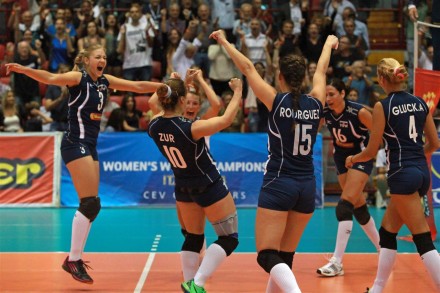 After losing 2:3 to Israel on Friday night, Switzerland got back on track and immediately set the pace of their game with Latvia (16:10) to cash the opening set with a massive 25-15. Things did not change also in the second where Switzerland broke away quite early (14:7) and did not look back all the way through the final 25-14. Latvia finally got to the front in the early phases of the third set (3:1) and the score was tight halfway through as Latvia fought their way back from 9:12 to make it 13 all. This close race continued also after the second technical time-out (19:19), but after another tie at 23, Switzerland could score two consecutive points to bring it home in straight sets. Three Swiss players finished the game in double digits with Laura Unternährer topping all scorers with 12 points while Ance Auzina paced Latvia with 10. With this result the Swiss made sure they will finish among the top three of the tournament and can continue their World Champs campaign in early January.

Montenegro was still searching for their first victory in the tournament as they played Hungary on Saturday but their opponents showed no mercy to quickly claim a 17:13 lead in the opening set. Still the girls from the Balkans fought their way back to -1 twice (18:17 and 20:19) but Hungary did not lose composure to cruise to the final 25-22. After Montenegro had caught a very promising start (8:5), Hungary got back control of the operations halfway through the second set (16:13) and gradually widened the gap (20:14) to make it 25-17 in the end. Hungary opened strong also in set 3 (8:5) and did never lose control of the game to cash the final 25-15 and a ticket to the third and last round of the World Champs qualification process. Hungary was paced by Renata Sandor and Agnes Pallag with 19 and 16 points respectively while Tatjana Bokan was once more the most prolific player for Montenegro with 15.

The much awaited final duel of the day starring Israel and Greece was attended by more than 500 fans at Metrowest Sports Palace in Ra’anana. Greece got off to a flying start cashing the opening set with the score of 25-20 but after trailing also in the early phases of the second set (6:8), Israel finally found their way into the game drawing level at 10 all. After another tie at 20, Israel could change gear and make it 1:1 in sets (25-22). The third set was extremely close as well with both teams having a few opportunities to cash the provisional 2:1; Greece did not capitalize on these chances and Israel eventually finished it off at 30-28. Though they dissipated a 21:15 lead, with their opponents drawing level at 21 all, and after the score was leveled at 22 and 23, the hosts were able to keep cool and wrap it up at 25-23 for a 3:1 win to pocket their ticket to the next round. Russian – born Anna Velikiy top scored for Israel with 28 points while Tatiana Artmenko and team captain Moran Zur chipped in with 18 and 17 respectively. Eleni Kiosi paced Greece in their losing effort with 17 as well.