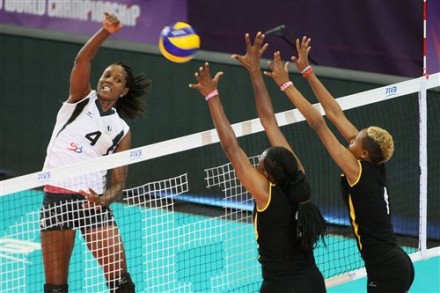 Kenia Carcaces helped her side with 13 points. Olesia Rykhliuk added 9 winners for Volero. Everlyne Makuto was the best scorer for Kenya Prisons with 8 kills. Volero had the edge in blocking kills (5-3) and service points (5-3) and committed less errors (9-26).

The two teams felt their way into the match slowly and they were level through 7-7 when the wheels came off for the Europeans. Outside hitter Kenia Carcaces and opposite Olesia Rykhliuk started the Swiss offensive firework with some blistering winners from the wings. Volero had the set under control but they, too, experienced many ups and downs in the first set. Kenya Prisons did their best to catch up but they were not powerful enough. Nadja Ninkovic concluded the second set ball for Volero at 25-17.

The Swiss eased to an 8-2 lead at the first technical timeout with a couple of good shots from captain Natasa Osmokrovic and a nice block from setter Karine Guerra. 19-year young Laura Unternährer helped the hosts’ score along in the second phase and the favourites were 16-6 ahead at the second technical break. Olesia Rykhliuk booked another block winner and sent a cross-court shot zinging through the African defence. An Kenyan service error ended the second set 25-13 in Volero Zurich’s favour.

The Kenyans didn’t help their cause with some sloppy play early in the third set, sending shots long or into the net, and Zurich cruised to an 8-1 lead at the first technical break. A Rykhliuk hammer and a quick combination at the net by second setter Jovana Gogic and Ninkovic extended that to 14-3 and the margin was 13 points at the second technical timeout. The Europeans followed up with some spectacular play and it remained all one-way traffic until 25-6.