Adrian Doci (see picture) was unanimously elected President of the Albanian Volleyball Federation at their General Assembly held on Saturday in Tirana. Doci was the sole candidate for the position and swept the votes of all the delegates in attendance thereby replacing outgoing President Ibrahim Aksoy. 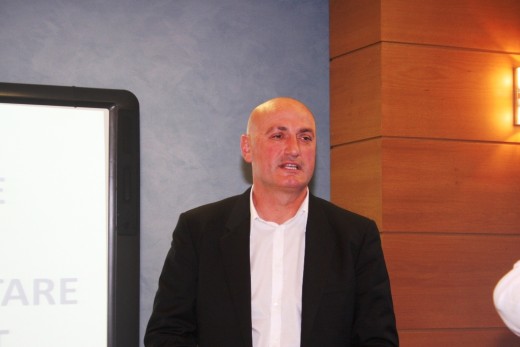 Adrian Doci is a real Volleyball legend in the country after playing competitively for almost 20 years and throughout the ‘80s he won the national league ten times; he also has another eight titles from the national cup on his resume. He previously was a member of the Executive Committee and already supported the work of the Albanian Volleyball Federation for the past four years.

“I am just one of you and since I have been a member of this community for a long time I am well aware of the problems that we need to tackle and to solve,” Doci said following his election. “I have been working for the last four years doing my best to support Volleyball in Albania and now will try to move things forward. We need to stick together and to help each other. I will give my best to help Albania’s Volleyball family similarly to what I have already done as a player and a sponsor in more recent times”.

Volleyball in Albania is moving to a new era after this election for almost all members of the Executive Committee have changed. Artan Pogoni is the only previous member who was re-elected and will compose the Executive Committee together with Dashamir Brari, Erlin Pëllumbi, Indrit Buka, Ilir Cirinaku, and Amos Dojaka. Leonard Tase will continue his work as Secretary General of the Albanian Volleyball Federation supported by Mrs. Loreta Pira who will be taking care of the Federation’s finances.