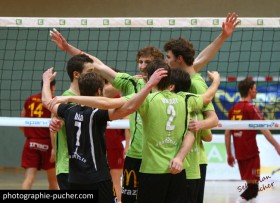 The coach of VCA HYPO Stefan Krejci: “The arrogance of the team has been punished today. I expect that the team will finally take their opponent seriously and on Wednesday in Graz appropriately respond.”

Also, the duel between Raiffeisenbank Arbesbach and TSV Volksbank Hartenberg is fifth in the round on Wednesday.

Niederösterreich lead in the series with 2-1.

Hypo Tirol and Aich / Dob have already secured their places in semifinals.