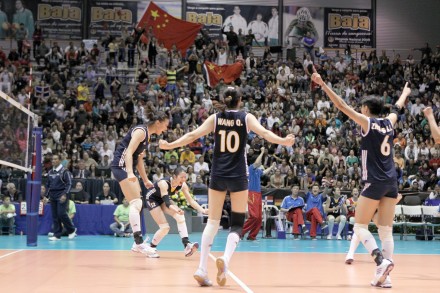 China seems blessed to have a crop of gifted young volleyball players and their string of successes with the age-group competitions this season has the volleyball world humming.

Talking post-match about his team’s win at the U23 World Championship Open, coach Xu Jiande was quick to play down his team’s success saying, “The match was played at a very high level and could have gone to either side. Tonight luck worked in our favour.” But even to the casual observer it was clear that luck played a very small part in their success in Mexico.

That China was in fighting form against some tough competition from the Dominican Republic, Brazil, the United States and Japan is no fluke.

“Comparatively speaking, the Chinese team is more balanced,” said legendary Chinese volleyball player Feng Kun, who joined the team’s entourage as its manager in Mexico. “Our players have both good volleyball skills and some advantage over the net.” Not surprising considering that team members for the U23 World Championship were picked from eight well established provincial and municipal volleyball clubs from around the country.

“After the announcement of the drawing of lots, we had the feeling that we were drawn into the ‘Group of Death’,” said Kun. “We didn’t know much about the other teams and we didn’t think we were a very strong team and we didn’t expect too much. Fortunately our team played better and better and consecutive victories kept boosting our confidence as well. I am happy that the players have proved their abilities.”

While solid team work was vital, Kun also praised new setter Yao Di, who was largely responsible for the organisation of the team’s attack. “It’s the first time I saw her play and I was quite impressed,” said an enthusiastic Kun. And Kun (nicknamed ‘Panda’) should know a good setter when she sees one having earned the unofficial title as the best setter in the world during her illustrious career.

Off the courts, a significant amount of work is being done at the grass roots level to ensure that China continues to unearth, develop and nurture budding talent in volleyball as well as football and basketball.

The decision to add U19 competitions for these sports into the official programme of the 2013 Chinese National Games, has resulted in many regional teams and clubs increasing their investment in young players over the last few years. The core aims of this policy is to provide the country’s sporting stars of the future with the opportunity to gain valuable experience in a more competitive environment, easing their transition into senior levels.

Finishing with a silver medal at the 2013 World Grand Prix, following some disappointing results in recent years, definitely bodes well for the country’s senior national team in the run up to the 2016 Olympic Games in Rio.