US American Kimberly Hill – who last night debuted in the 2014 CEV DenizBank Volleyball Champions League with Atom Trefl SOPOT scoring an away win in Romania – was recently nominated by head coach Karch Kiraly for the team that will represent USA at the FIVB Women’s World Grand Champions Cup scheduled for November 12-17 in Nagoya and Tokyo, Japan. 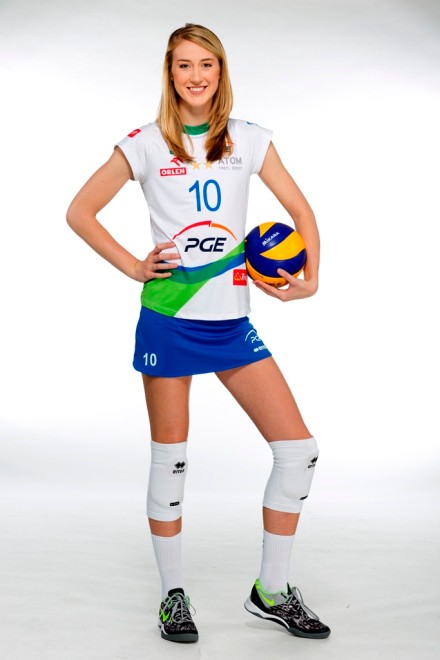 Team USA qualified for this tournament after winning gold at the NORCECA Championships last September in Omaha, Nebraska, and will play Asian champions Thailand, European champions Russia, South American champions and 2012 Olympic gold medalists Brazil, as well as hosts Japan and the Dominican Republic, the team that received the wild-card attributed by FIVB/JVA/NTA. USA will play Brazil on the first day of action in Nagoya in a remake of the Olympic final from London 2012 before taking on Japan; in Tokyo Team USA will then get to test the likes of Russia, Thailand, and the Dominican Republic.

This means Atom Trefl SOPOT will have to play some matches of the national league without counting on the contribution of their American wing-spiker. She will be missing two away matches with Impel WROCLAW and Budowlani LODZ as well as the home game with PGNiG Nafta PILA. Hill will leave Poland on November 3 and come back two weeks later.

“Of course we would prefer she could stay with us and help us in the national league, especially as she just got to Poland after playing with Team USA in the FIVB World Grand Prix and then also at the NORCECA Championships. We discussed with Kiraly the possibility to keep Kimberly here in Sopot but he said she is very important for Team USA at this stage. We are happy to hear that her contribution to the national team is so essential and we will follow closely her performance in Japan. Team USA has never won this competition before, so we believe that with some luck Kim may help the US Americans take the trophy home” says the press officer of Atom Trefl SOPOT, Katarzyna Wirkowska.

Hill will not miss any CL action as Europe’s elite competition will have a break from October 29 up to November 29, so she will be back in time for the much anticipated home game against Turkey’s world champions VakifBank ISTANBUL.

U r sch h genious girl on earth… unbelievable volleball player… Ur playing is extremely good.. M big fan of u… I saw u firstly in olympics … M flat on ur height nd ur beauty.. .. U r perfect combination of beauty with brain…. So all the best for future… lv u…. Nd in life my dream is to meet with u.. I said to my father when u played in olympics… That m will meet with this girl in my life surely….