On Thursday Bulgaria’s champions Marek Union-Ivkoni DUPNITSA will be playing Italy’s Copra Elior PIACENZA for the fourth round of action in preliminary Pool A of the 2014 CEV DenizBank Volleyball Champions League – Men. 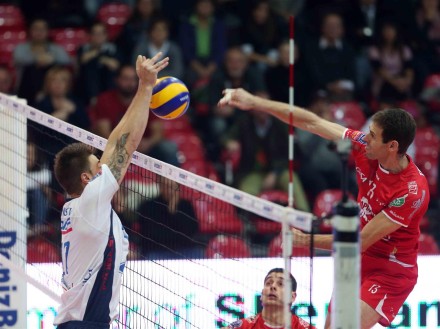 Marek Dupnitsa is currently at the bottom of the charts with no points after three rounds while Copra Elior PIACENZA is ranked second with seven, chasing leaders TOURS VB. If they want to take first place in the Pool, the Italians will have to take three points from their away match in Bulgaria.

Marek Dupnitsa head coach  Nayden Naydenov does not have to cope with any injuries and so will be able to opt for his ideal starting six. Though composed of very young players, his team is the dominant force right now in Bulgaria with seven victories in as many matches in the national league and 20 points to top the standing. Last weekend Marek Dupnitsa easily beat CSKA SOFIA in straight sets.

Copra Elior PIACENZA is currently ranked second in the standing of the highly-competitive Serie A1 following on their away victory over Andreoli LATINA from the last weekend (37-35, 22-25, 25-16, and 25-16). Copra Elior PIACENZA has won six of their seven matches so far and is currently chasing Lube Banca Marche MACERATA and preceding by one point  Diatec TRENTINO.