Germany’s champions are performing well in the Bundesliga as well as in the national cup but in the 2014 CEV DenizBank Volleyball Champions League they still have to take their first points. They will be trying to achieve this goal tomorrow as they host Czech champions Agel PROSTEJOV for a remake of the away match they lost last week (1:3). 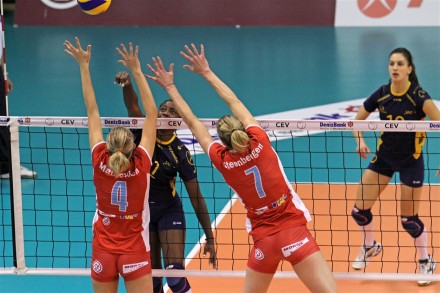 That game was very close but in the end PROSTEJOV had the upper hand by exploiting the experience of their players. However, after taking one set in the Czech Republic, SCHWERINER SC hope they can achieve more at home and hopefully seize the night.

This is actually almost the only opportunity to win one game in this year’s CEV Volleyball Champions League for SCHWERINER SC for the other opponents in Pool D, RC CANNES of France and Turkey’s Eczacibasi VitrA ISTANBUL, seem too strong to stand a chance. In order to keep alive their chances to finish third in the group, SCHWERINER SC shall win that game in straight sets but it is going to be a very difficult mission to accomplish.

Germany’s champions lost this weekend at the tie-break to SC POTSDAM in the Bundesliga so that their winning streak came to a close after five straight matches. This defeat does not help the players around head coach Felix Koslowski but with the help of their fans they will go for a much needed home victory on Wednesday night.

Also check out news from this country on Germany.

TUR M: Henry Bell on his way out from Galatasaray?