December 21, 2013 – As the first feature as part of our end-of-year review series, www.fivb.org looks back at the FIVB Volleyball World League 2013 where the top three teams in the world all returned to the podium. 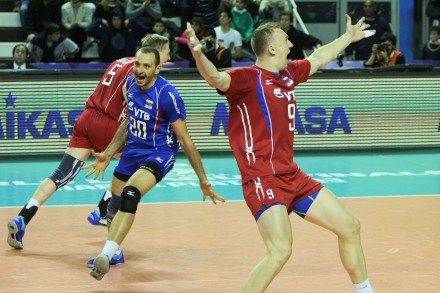 The FIVB Volleyball World League 2012 finished with Poland as gold medallists, USA with silver and Cuba with bronze. One year later, all three teams had already crashed out at the Intercontinental Round of volleyball’s most important men’s annual competition.

Last year’s finalists Poland and the USA could do no better than finish fourth and fifth, respectively, out of the six teams in Pool A. Cuba finished a distant last in Pool B, having won just one of their 10 matches. This gives credence to the idea that the year following an Olympic Games is traditionally one of upheaval, although that didn’t stop the World League medal matches from being an exact repeat of the ones from London.

World No. 2 Russia overcame Brazil, ranked first in the world, 3-0 in the final at Mar del Plata, having already beaten them in the opening match, but were close to an Intercontinental Round exit after suffering a 3-2 defeat to Germany. Only with the help of World League debutants Iran were they able to book their place in the Finals. Once at the Finals, the Olympic champions lost to Canada, who finished fifth, but still clinched their third World League crown.

Record World League winners Brazil were once again the outstanding team in the Preliminary Round. They suffered just one defeat in their 10 matches – at home to a rejuvenated France. Having finished sixth last year – their worst ever result in the World League – the South Americans were back on form this time out. They missed out on a record 10th World League triumph and had to settle for second place.

World No. 3 Italy have eight World League titles to their name, but must go back 12 years for their most recent success. Missing stars like Samuel Papi, Luigi Mastrangelo and Alessandro Fei, the new-look Italy side still impressed with seven victories on their way to winning a strong Pool B. Ivan Zaytsev was the top scorer in the Preliminary Round with 215 points. They overcame Bulgaria 3-2 in the bronze-medal match, but their most spectacular result was their 3-1 victory over Olympic champions Russia.

CHN W: Jiangsu with the upset!