The U.S. Women’s National Volleyball Team, ranked No. 1 in the world by the International Volleyball Federation (FIVB), will host Bulgaria in a series of friendly exhibition matches in Southern California prior to departure for the Olympic Games. 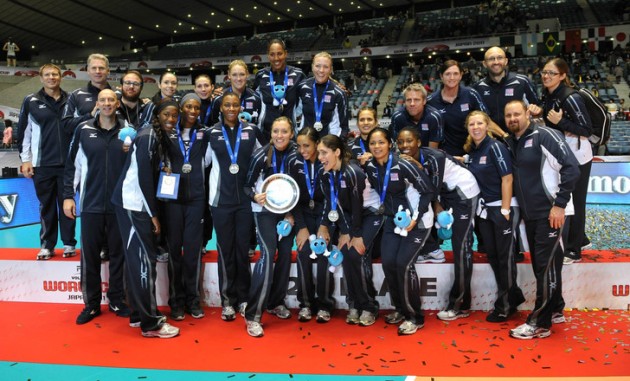 The City of Anaheim, the official host city for both the U.S. Women’s and Men’s National Volleyball Teams, will serve as host for the first of three exhibition matches with Bulgaria. The initial match will be held on July 14 at 7 p.m. Pacific Time inside the American Sports Centers, the team’s training headquarters located in Anaheim. Ticket information will be available later this month.

The University of Southern California will host matches on July 16 and July 18 at the on-campus Galen Center. Both matches are scheduled for 7 p.m. Pacific Time. Admission for the two matches played at USC is $10 for adults per match, while tickets for children 12-and-under and groups of 10 or more are $5 per match.

The U.S. Women will use the matches as final preparations for the 2012 Olympic Games, which take place July 28 to Aug. 11. Team USA qualified for the Olympic Games with its silver-medal finish at the 2011 FIVB World Cup in November.

“We are extremely excited to play this pre-Olympic series with Bulgaria,” U.S. Women’s National Volleyball Team Head Coach Hugh McCutcheon (Christchurch, New Zealand) said. “They are a talented and physical team who will definitely help us prepare for London. The fact that we get to play these matches at home is huge, and we appreciate the University of Southern California and the City of Anaheim for stepping up to host. This will be a wonderful series of matches.”

Members of the U.S. Women’s National Volleyball Team have started to report back to Anaheim, Calif., for the start of the training block. After a busy and fruitful overseas club season, the players will now concentrate their efforts toward the ultimate goal – the Olympic Games gold medal.

The U.S. officially opens its 2012 season competing in the FIVB World Grand Prix as the event’s two-time defending champion. The squad opens the tournament on June 8 against Germany in a Pool B match at Santo Domingo, Dominican Republic. Team USA follows with first-round matches against either Algeria or Chinese Taipei (play-in winner decided April 27-28) on June 9 and host Dominican Republic on June 10.

The U.S. travels south to Brazil for the second preliminary round weekend with three tough contests. Team USA opens Pool E against 2011 FIVB World Cup winner Italy on June 15, followed by a match against Germany on June 16 and second-ranked Brazil on June 17.

The U.S. travels halfway around the world for the third preliminary round weekend with Pool J set in Bangkok, Thailand. Team USA faces Serbia on June 22, followed by Argentina on June 23 and host Thailand on June 25.

The top five teams among the 16-teams in the preliminary round advance to the Final Round, along with host China. The six-team Final Round will take place June 27 to July 1 starting with two pools of three. The top two teams in each Final Round pool advance to the crossover semifinal on June 30 before the medal-round matches on July 1.

Prior to the 2012 Olympic Games, the U.S. Women will compete in the 11th Annual Pan American Cup scheduled for July 11-21 in Mexico.

Sportsmanship rises above the politics – bamboo...