Unity Primary School were crowned the new champions of the JaVA Primary/Prep School Volleyball Competition in Jamaica over the weekend, beating Irwin Primary 15-10, 15-10. 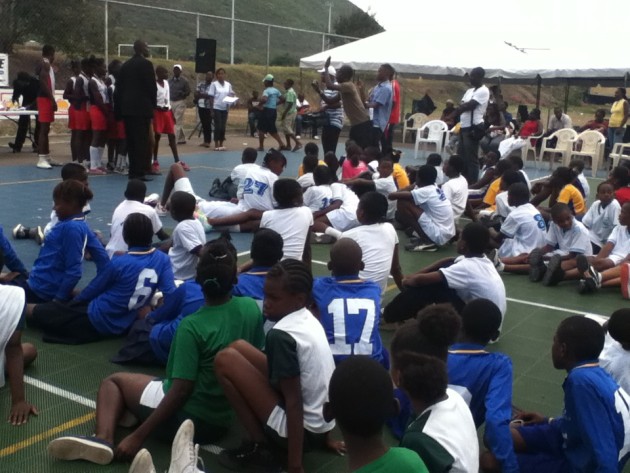 After emerging from dogged preliminary, quarterfinal and semifinal matches, Unity, from Westmoreland, walked away with the national title.

Earlier on in the competition, Unity emerged from the preliminary round on top of their group and played Lyssons Primary from St Thomas in the quarterfinal. They won the match in three sets 15-2, 14-15, 11-2 before beating local rivals Little London 15-12, 15-10.

On the other side of the draw Irwin also emerged from the preliminary round as pool winners and played Port Morant in the quarterfinals.

They came away 15-11, 15-10 winners and moved on to play defending champions Greater Portmore Primary in the semifinals. In what was the most intense match of the day, Irwin took the first set 15-8 and had five match points with the score on 14-9 in their favour. However Greater Portmore’s coach, Dwight “Baatpan” Steadford, performed his second “Houdini” act of the day to lead his charges to take the set 15-14.

The magic didn’t last for much longer though as Irwin ran away with the deciding set 11-4 to secure their birth in the finals. Greater Portmore quickly pulled themselves together and showed the heart of a champion to take the third place match against Little London 25-16.

Kaldane Channer of Unity Primary took the President’s Madd Skills award, while Jahaina “Ras” Rose of Irwin Primary was named MVP for displaying good leadership, balanced with a fair grasp of volleyball skill sets. The top three teams were rewarded with medals, trophies and balls, with the winning team also earning a net. The other nine teams that competed at the final were given balls courtesy of NORCECA Volleyball Confederation.

Warrenton Dixon, president of the Jamaica Volleyball Association, in his address to the children, said that he desired to see Jamaican children wearing the national colours in competition at the regional and international levels.

“This is not farfetched. It is being done by other countries,” he said. “You are no worse than they are; you just lack opportunity. JaVA will do what we can to prepare you until we can get some substantial funding support to do more. Jamaica will be a major force in volleyball.”

Dixon also acknowledged Haile Mikael, the coach who inspired him to organise the primary-level schools competition. In 2009 Mikael had organized a competition between five Westmoreland-based schools, all of which he coached.

“After seeing that competition I was convinced that if one little-known man could organize such a competition nothing should stop a National Association from improving on the effort,” Dixon added.