Mr. Essa Hamza Ahmad Al Failakawi, FIVB Board of Administration Member and AVC Senior Vice-President, visited on Thursday the premises of the Volleyball Federation of Serbia. Mr. Al Failakawi enjoyed this opportunity while being in Serbia’s capital city in his capacity of President of the International Automobile Club Kuwait to participate in an international conference organized by the Automobile and Motor Association of Serbia. 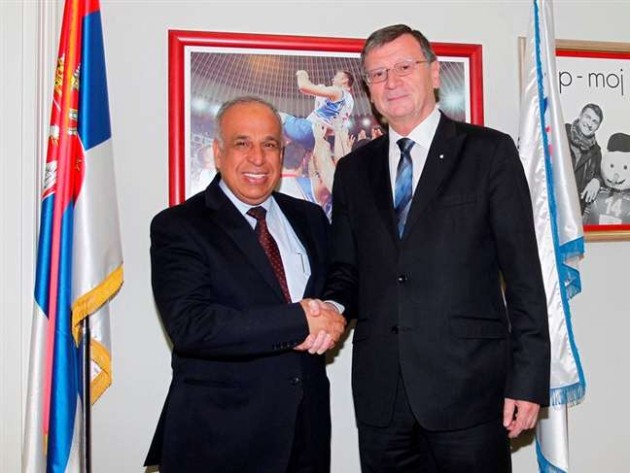 Aleksandar Boričić, VFS President, FIVB Executive Vice-President and CEV Senior Vice-President used this opportunity to discuss with Mr. Al Failakawi the development of Volleyball on a worldwide scale, the partnership between the Volleyball Federation of Kuwait and Serbia, as well as the cooperation between the European and Asian Volleyball Confederations.

“I must say that I am very happy to meet President Boričić in his office and discuss issues of common interest and exchange ideas, as we are both Senior Vice-Presidents of our respective Continental Confederations”, Mr. Al Failakawi says, “and although I had planned to visit Serbia since many years, I finally did not come here on a Volleyball trip”.

“The main reason of our good relationship is that we have been together in the FIVB Board for many years and I appreciate the way he works. We discussed many issues of common interest, in particular the relations between the Serbian and Kuwait Volleyball Federations, as I headed the Kuwait Volleyball Association for many years and Serbia has become one of the top Volleyball countries not only in Europe, but in the world. We spoke about the future of our relationship, but we also discussed about the level of Volleyball in the FIVB and how to increase the quality of the sport worldwide as the FIVB Congress is coming up this September in Anaheim, California” continues Mr. Al Failakawi.

“We went through all major issues that will be discussed in the FIVB Congress, as we would like to unite members before the Congress having in mind the three candidates for the Presidency, and about how to support and give our contribution in the forthcoming four years”, he concludes.

TUR: Miljkovic in Fenerbahce for next two seasons